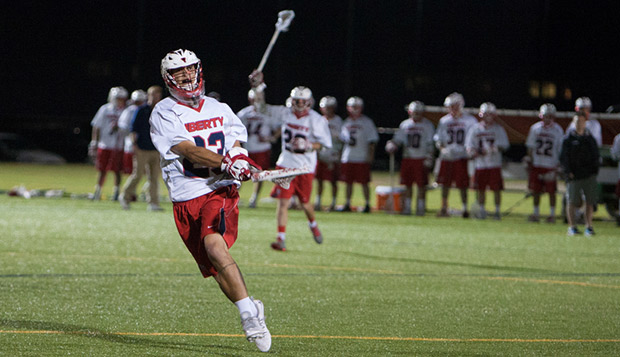 Liberty senior goalie Ethan Kamholtz comes out of the cage to make a clear, backed up by junior midfielder Bryce Mrakovich.

All five of Liberty University's men's lacrosse team's losses this season came against teams ranked in the MCLA Division I top 25 poll, including Saturday night's 9-7 setback in the SouthEastern Lacrosse Conference Division I Tournament semifinal against sixth-ranked Georgia Tech in nearby Johns Creek, Ga.

After giving up an early 2-1 edge, Liberty (10-5) stayed within two goals for most of the night but never managed to take the lead or even tie it up.

Sophomore midfielder Holland Frost gave Georgia Tech (15-0) the lead it would never relinquish by capitalizing on an open shot from close range in the final second of a man advantage, beating Flames goalie Ethan Kamholtz for a 3-2 lead with 6:08 left in the first quarter.

Liberty trailed 5-3 at the half and 7-5 after three quarters before trimming the deficit to one goal twice in the fourth.

Less than a minute in, Flames senior attack Ryan Miller (one goal, one assist) sent a pass across the box to freshman attack Nick Lombardozzi, who rifled a left-handed shot into the upper netting to make it a 7-6 contest. But junior midfielder Brett Bernardo (1G, 1A) narrowly missed a chance to tie it up a minute later on a high-percentage shot that caromed off the post.

"We were able to find him in the crease and he beat the goalie, beat everybody," Liberty Head Coach Kyle McQuillan said. "He was where he wanted to be, he just hit the pipe low far-side. A lot of things just didn't go our way tonight. We were exactly where we needed to be doing exactly what we wanted to do, we just could not finish."

Later, after Frost answered by concealing an off-hip shot from the top of the box to give the Yellow Jackets a two-goal cushion, Flames junior midfielder Bryce Mrakovich (2G) threaded a shot from deep in an open left crease past Georgia Tech junior goalie Matthew Sommerfeldt to trim it back to 8-7 with 6:45 left in regulation.

Liberty sophomore defenseman Nate Whyte made a ground ball pickup steal with 3:30 to go but Miller turned the ball over with 2:20 left, allowing Yellow Jackets junior middie Benjamin Mertz to add an insurance goal with 49 seconds to play after catching Kamholtz out of position with a bouncing shot.

Mrakovich tried to cut it back to a one-goal game by picking up a loose ball off the ensuing faceoff, but his shot while falling down in traffic bounced past Georgia Tech's goal, returning the ball to the Yellow Jackets.

"We usually have better control of our shots," McQuillan said. "We were shooting like crazy tonight, but between hitting pipes and not finding net," the Flames were held to seven goals for the second time in three games.

Liberty's attackmen were often forced to alter their shots due to the goalkeeping of Sommerfeldt.

"We knew about him coming in and he lived up to the hype," McQuillan said. "He definitely had a big impact, but Ethan (Kamholtz, 18 saves) went stride for stride with him and made a number of really big saves and we played very sound defensively. The guys put us in position to not only be competitive, but to win."

Kamholtz made 18 saves and allowed nine goals for a 67 save percentage, which is what Sommerfeldt has maintained in each of his four seasons at Georgia Tech.

Liberty junior midfielder Charles Fianko, squaring off against Frost, the SELC faceoff specialist of the year, won 14 of 19 faceoffs on the night.

"He played really well," McQuillan said. "For Chuck to be able to come in and do that against Frost, a two-way middie, he gave us a chance to win it.

"Nobody likes losing, but if you go down, you want to go down swinging and we were really proud of the effort they were able to put forth tonight," he added. We weren't able to defy the odds and get back to the SELC DI final rematch with Virginia Tech, but we played hard, left it all on the field and have nothing to be embarrassed or ashamed of. We played our style, played our game. Unfortunately, it wasn't our night and we have to walk away knowing that was a game we could have won."

The Yellow Jackets advance to meet the current SELC Northwest Region regular-season and defending tournament champion Hokies (also 15-0) in Sunday's championship game and battle of the unbeaten. The winner will earn the automatic bid to the May 11-16 MCLA National Championships. The Flames, meanwhile, must wait to see if they receive an at-large bid to nationals, which will be a bit of a longshot now with the tournament runner-up getting first dibs. Last year, Virginia Tech was the SELC's only national qualifier, but this year the league has four teams ranked in the top 25.

"We're a bubble team and we've done enough to be in the conversation, but it comes down to we don't have that elusive signature win (against a top-10 team)," McQuillan said. "We lost against some really good teams this season and we're going to use that as motivation coming back for next year. We learned from it, we grew from it, and we're only graduating three kids so the overwhelming majority of these players will be back. Hopefully, we'll be able to hit the ground running next year."