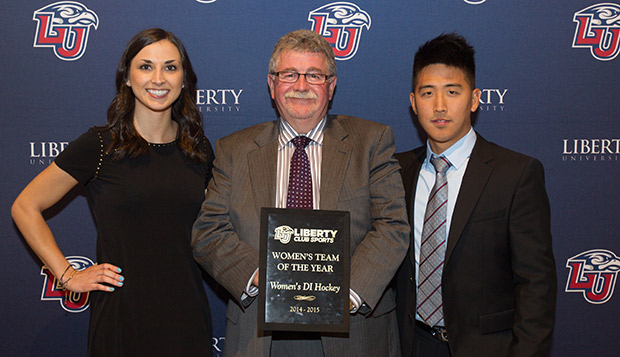 For the first time, the banquet was designated a formal affair, which was a fitting way to honor the 52 senior athletes who competed in one or more of the 33 sports offered by the department over the past four years. Out of the 509 student-athletes in the program, 13 were honored for maintaining grade-point averages of 4.0 or above along with another 83 who achieved GPAs that eclipsed the 3.5 mark this school year.

For the second year in a row, the Male Athlete of the Year was awarded to a freshman wrestler, Josh Llopez, who finished 24-3 and captured the 174-pound National Collegiate Wrestling Association (NCWA) tournament championship, March 14 in Allen, Texas. He helped the Flames claim their first team trophy along with last year's Club Sports Male Athlete of the Year Ryan Diehl, who became the first to repeat as the NCWA Tournament's Most Outstanding Wrestler.

Female Athlete of the Year went to Chantal Lischynski, the senior goalie and tournament MVP on the Lady Flames' ACHA DI national championship women's hockey team who posted five shutouts on the season and boasted a 0.99 goals-against average. She edged junior figure skater Fantasia Remonvil and sophomore snowboarder Sydney Beatty for the award.

Ian Rigney, a junior member of the men's archery team, was recognized for turning in the Outstanding Performance of the Year by winning the 45th annual United States Collegiate Archery (USCA) Indoor National Championships in Lancaster, Pa., with a score of 1,178 out of a possible 2,000 points. Other nominees for the award were senior snowboarder Kevin Hoff's Slopestyle and Rail Jam showings at the United States Collegiate Ski & Snowboard Association (USCSA) nationals at Mt. Bachelor in Oregon and freshman Tae Kwon Do athlete Tykeyah Henderson's yellow belt title at the 40th annual National Collegiate Taekwondo Association (NCTA) national championships in Delaware.

Additionally, the wrestling team presented awards to Senior Vice President of Auxiliary Services Lee Beaumont for his role in the success of the program and Senior Director of Campus Recreation Kirk Handy and the rest of the Club Sports department for ongoing support and encouragement.

Handy thanked the students who provided more than 10,000 hours of support in their academic fields in the spring semester alone, including many under the direction of the Liberty Flames Sports Network, represented by Matt Byrd, LFSN's streaming producer; Russ Martin, LFSN's executive producer of broadcasting communications; and Dr. Norman Mintle, dean of Liberty's School of Communication & Creative Arts, which supplies many of the student workers for live webcasts of sporting events.

LFSN sports anchor Rett McGibbon served as host of the banquet and announced the award winners.

The banquet concluded with a prayer by men's volleyball coach Bryan Rigg after the viewing of a video highlighting the entire year of action put together by Patrick Strawn, the Club Sports video and media coordinator.