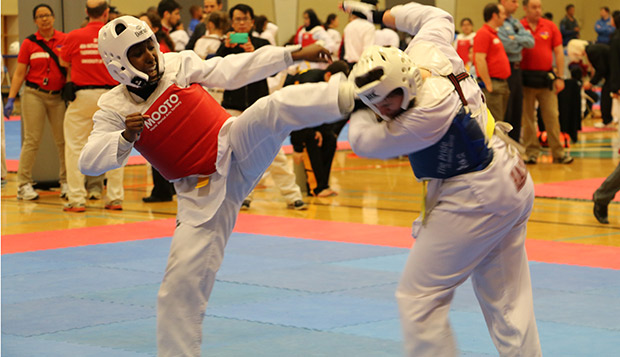 Lady Flames freshman Tykeyah Henderson lands a kick on her way to the women's heavyweight yellow belt title on Saturday.

"This was the largest NCTA Championships to date with nearly 600 competitors from colleges throughout the United States, with Liberty being the newest to attend for the last two years," Flames third-year Head Coach Jesse Wilson said. "It was an amazing weekend for the team. We trained champions in Christ's name and on the weekend of celebrating His resurrection, He lifted us up so that we could rise as Champions for Christ."

Healy, a Junior Olympic national team member from Houston, won his collegiate national title a day after he turned 18.

"Jonathan is a major contender in Taekwondo and is striving to one day be in the Olympics," Wilson said. "He is currently ranked in the top 100 competitors in the world with a (17-and-under) Olympic ranking of 96."

Healy, who was named NCTA freshman athlete of the year, will now have the opportunity to represent Liberty and Team USA at the July 7-13 World University Games in Gwangju, South Korea.

"Tykeyah's dad recently passed away and she promised him that she was going to win this for him right before he died," Wilson said. "She upheld her promise."

"While they did not win in their respective divisions, they did show great effort in their performance and I couldn't be more proud of their accomplishments," Wilson said. "They are just as much champions as they helped to support their teammates and give them the encouragement they needed to win their divisions."