Blue skies ahead for Liberty's men's and women's tandems 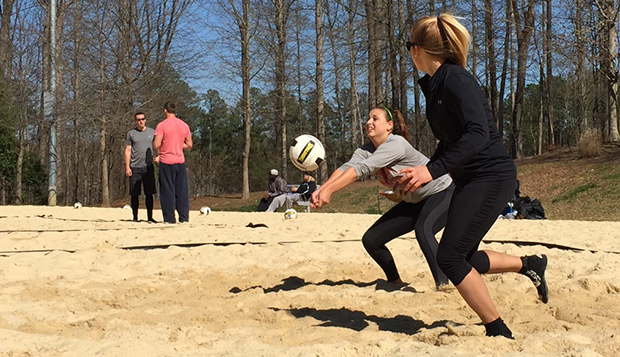 "I was really, really proud of both of our teams," Liberty Head Coach Rachel Willis said. "It was a really fun match to watch. They were both so scrappy on defense. They had smiles on their faces the whole time so you can tell that they love the game."

Evans, a transfer from a community college in Florida where she played volleyball, complemented  Zentmeyer well.

"She's a very solid player with a great base of all-around skills, she's very consistent, and, like Tinsley, she's a very tenacious player, so they are going to make great partners this year," Willis said. "I'm excited to see the progress of Brittany and Elissa this season and I expect them to take a doubles tournament title in the very near future."

"The teams that played in this tournament play in open divisions up and down the East Coast all year, so they're very experienced," Willis said. "Aaron and Kaleb did an excellent job there."

Senior Tim Jacobsen and sophomore Mike Ragan placed 11th out of 12 teams in that bracket.

"It was actually Mike Ragan's first tournament ever, so it was very ambitious of them to play in open, but they were game and they did a really good job," Willis said.

On the women's side, Lady Flames sophomores Morgan Horne and Jules Johnson competed in the open division but didn't make it out of their pool play.

Liberty also entered two men's teams in the AA Division with senior Ryan Burtt and freshman Andrew Ray advancing out of their pool before losing in the quarterfinals and senior Ezra Kwame and sophomore Andrew Winn eliminated in pool play.

"I'm really excited about the promise and the talent that I saw come together with the teams," Willis said. "They obviously have a long way to go in terms of developing skill and consistency, but the things I saw them do on Saturday I was really pleased with."