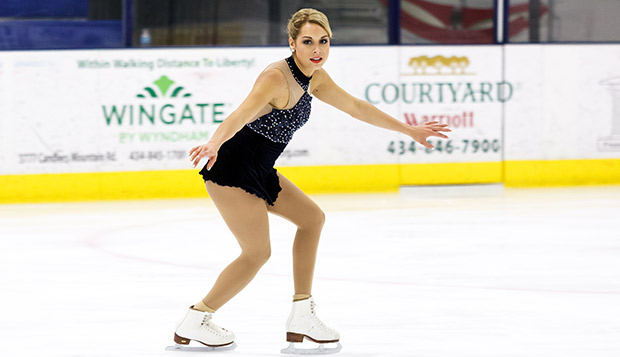 Wrapping up its most successful season in the program's six-year history, Liberty University's figure skating team placed seventh out of 23 teams at Saturday's and Sunday's Delaware Intercollegiate Eastern Sectional, hosted by the University of Delaware at Fred Rust Arena in Newark, Del.

"This was a great high note to end on for an overall successful year that has proven the continual growth of the Liberty University figure skating program," Lady Flames Head Coach Tatiana Payne said. "This is light years beyond what we have been able to accomplish in past seasons."

Overall, based on all three sectional competitions, including one hosted by Liberty on Feb. 28 and March 1 at the LaHaye Ice Center, the Lady Flames finished ninth out of 27 East Coast programs.

Hautbois and Remonvil were joined by senior Shelby Locklear to place third place out of 11 entries in the Intermediate Team Maneuvers competition, an event the Lady Flames earned their first-ever gold medal in on their home ice.

Individually, Locklear also placed fourth out of eight skaters in Group B of Intermediate Ladies.

"Overall, Liberty had a great weekend," Payne said. "Considering that we had one of the smallest teams there — with only eight skaters, two less than in our previous competitions — they were able to have a great showing and surpass many larger teams."

Payne was equally pleased with the Lady Flames' performances on the ice and the way they represented Liberty at the event.

"I am very proud of what they were able to achieve on the ice this weekend, and more importantly, how they carried themselves off the ice to their competitors," she said. "Liberty is well-liked team because of our sportsmanship and frequent words of encouragement to other teams."