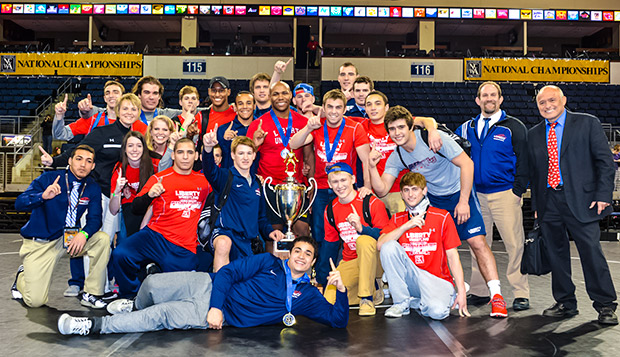 Flames sophomore defending 133-pound NCWA national champion Ryan Diehl (22-3) wrestled through an ankle injury that sidelined him for much of the past two months to win the 141-pound title, scoring an 11-1 major decision over Naval Academy Prep's Adam Connell in the final. Diehl became the first-ever competitor to be selected as the NCWA Tournament's Most Outstanding Wrestler for a second year in a row.

"He was on a mission," Liberty Head Coach Jesse Castro said. "He was solid. He had two tech falls, two pins and a major decision in the finals, so he was pretty dominant. He wrestled really well."

After posting third-place team finishes in its first two years in the league and finishing runner-up last season, the Flames finally broke through for a team championship on the NCWA's grandest stage.

"It is actually the first time and I am very proud of it because of the adversity we had to overcome to do it," Castro said. "We had a lot of injuries. Anything that could go wrong, went wrong, so for us to do what we did was a great testament to these guys' tenacity and commitment, their will to get it done."

Liberty junior 149-pound wrestler Peter Tatanish suffered a neck injury in Thursday's first day of the tournament but was discharged from the hospital in time to see his teammates compete on Friday and clinch their first team championship on Saturday.

Senior 165-pounder Chase Boontjer injury defaulted out of Friday's championship semifinal match when his kneecap popped out of its socket.

"That was pretty incredible," said Castro, who witnessed Boontjer's injury. "(Club Sports Athletic Trainer) Angie Witt was right there on the mat to maneuver the kneecap back into place."

Liberty 165-pounder David Abbadusky had his tournament cut short by a concussion and fellow freshman Tyler Sigler didn't get to compete at nationals after tearing the MCL in his knee before the qualifier, leaving the Flames without a 133-pound competitor.

In the end, Liberty didn't need the 24 team points it earned by winning its second NCWA National Duals crown, Jan. 23-24 in Dalton, Ga. After advancing five wrestlers into the championship finals, and accumulating bonus points for major decisions, technical falls, and pins, it actually clinched the team trophy before wrestling began on Saturday.

"We've had our sights set on this since we left this place (as tournament runner-up) a year ago," Castro said.

Diehl and Llopez were Liberty's only two champions out of five finalists, but a total of nine of Liberty's 17 wrestlers earned All-American status with top-eight showings in 11 weight classes that averaged more than 40 competitors each.

Graduate student Josh Pelletier (33-6), who formerly wrestled for the Flames' NCAA Division I program, finally met his match in the 285-pound championship bout, where he was edged by Davenport's second-seeded Glenn Geurink, 3-2.

Liberty sophomore Evan Canady had his postseason pin streak stopped at eight matches in the 235-pound final, dropping a 5-3 decision to North Florida's Stuart Maddox to finish runner-up in his first season with the Flames.

Senior Keyshaun Ward finished fourth in the 184-pound bracket, losing a 5-3 decision to Montana Western's Jonathan Wiley in the third-place bout. He advanced to that match by winning three battles in the consolation bracket — pinning Dixie State's Brian Curtis in 1:02, scoring a 10-3 decision over MTSU's Jonathan Roberts, and pinning PSU-DuBois' Logan Shirey in 2:25 of the semifinal round.

Sophomore Ike Podell, whose only losses came to the eventual third- and fourth-place finishers, earned All-American status in the same 141-pound weight class as Diehl, scoring a 12-2 major decision over Middle Tennessee State University's Carlos Garcia in the fifth-place bout.

Boontjer wound up in sixth place after being unable to wrestle again on Saturday and junior Matt Reynolds came in eighth in the 197-pound bracket, dropping a 12-8 decision to Navy Prep's Josh Bailey in the seventh-place bout.