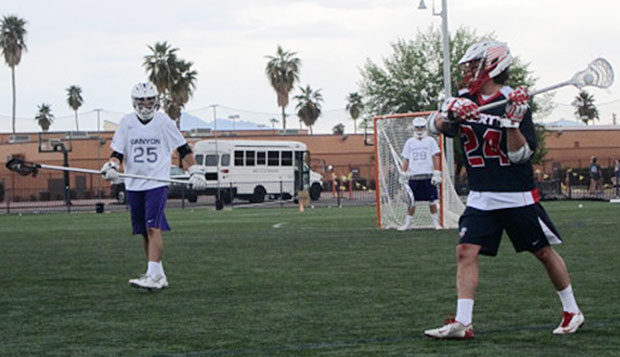 Playing in Phoenix temperatures that topped out at 90 degrees, Liberty University's men's lacrosse team was burned by Grand Canyon's transition game in Thursday's second game of its spring break road trip out West, falling by a 14-9 count to the No. 7-ranked team in Division I of the MCLA.

"We did a poor job of setting up and they exploited us," Liberty head coach Kyle McQuillan said. "We didn't have any success today in transition and unfortunately, Grand Canyon had all kinds of success. We did a very poor job of slowing them down and it ultimately cost us the game."

Junior midfielder Brett Bernardo (3 goals, 1 assist) scored twice and senior attack Chris Armstrong netted his only goal to give the Flames an early 3-2 edge, but it evaporated quickly in the desert heat.

"For a big chunk of the second and third quarters, we lost our bearings," McQuillan said. "We knew Grand Canyon was a team that scored in bunches and that was very good in scoring in transition, too. It was difficult to try to keep pace. We let them put too much distance between us to make a comeback."

Senior attack Carson Barton tied the game at 3-3 late in the second quarter before Ron Hamwey won the ensuing faceoff and put the Antelopes up 4-3. Just 20 seconds later, senior defensive middie Kris Holland netted Grand Canyon's third goal in a span of a minute to make it 5-3 with 2:45 left in the first half.

Grand Canyon (4-1) scored on its opening possession of the second half when freshman midfielder Cody Clark converted from the left side off an assist from Barton to extend the Lopes' lead to 6-3. Moments later, Barton put away a rebound of a shot in the right crease into the top corner of the cage before he finished his hat trick seconds after that to push it to 8-3.

Junior attack Dean Fairall then sent an inside feed to sophomore midfielder Austin Ekeroth for a short-range finish for Grand Canyon's fourth goal of the first five minutes of the second half, increasing its lead to 9-3.

The Antelopes jump-started their attack by winning 16 of 23 faceoffs. Besides allowing 14 goals, Liberty senior goalie Ethan Kamholtz made 14 saves.

"Ethan played very well and the team sort of hung him out to dry by not winning faceoffs and letting them transition effectively," McQuillan said.

Flames junior midfielder Chad Moore scored the first of his three goals off an assist from Bernardo, beating the GCU goalie through the five-hole to stop the Lopes' seven-goal surge.

Junior long-stick defenseman Tommy Rolewicz then finished his first goal of the season with a long run on net to trim the deficit to 9-5. But Barton netted his fourth of five goals for the game as Grand Canyon widened the gap to 10-5 before junior attack Drew Dziadyk stretched the advantage to 11-5 on a point-blank shot with 4.4 seconds left in the third quarter.

"Our middies were responsible for all but one of our goals today," McQuillan said. "Moving forward, we definitely need to get a more balanced look and more opportunities for our attack."

He would like to see the two programs establish a relationship where they would meet every year, and is optimistic about a rematch in the postseason.

"Grand Canyon absolutely was the better team today," McQuillan said. "They're a high-quality program with a lot of great players. We're hopeful to get a chance to see these guys again at (MCLA) nationals because we're confident we would give them a better game."

Though he knows the odds are against it, he believes Liberty can deal second-ranked Arizona State (5-1) its second loss of the season, Friday night in Tempe.

"The best thing is we have an opportunity for redemption with just over a 24-hour turnaround," McQuillan said. "Taking on the No. 2 team in the nation will be a good test for us. If these guys want to prove something, that we're better than we've shown in these last two games, they'll get an opportunity."