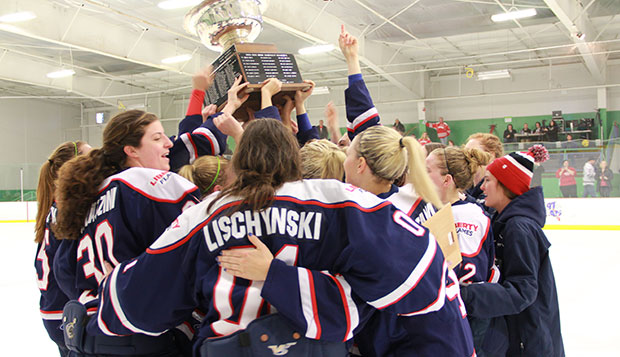 A spontaneous victory party broke out in the York (Pa.) Ice Center for Liberty University's ACHA Division I women's hockey team and its fans, friends, and families following Sunday afternoon's 4-1 triumph over Miami of Ohio (28-3-2).

"Absolutely amazing," Liberty Head Coach Paul Bloomfield said. "We just worked so hard, we've come so close. It's just awesome. The girls were awesome today. If we can do this again, it would be great. It's worth it all."

The Lady Flames, who lost two one-goal games to Miami, Nov. 21-22 in Oxford, Ohio, scored three goals in a span of 65 seconds midway through the first period to jump out to a 3-0 lead before answering the RedHawks' only goal early in the second period with one of their own 30 seconds later.

"We were just on them," Liberty senior forward Sarah Stevenson said. "We didn't give them the time to set up and get ready to block us. We came out flying and they couldn't handle our speed. We put it in the net early and they just couldn't come back after we got ahead of them."

As she had in Saturday's 3-1 semifinal triumph over Adrian, freshman forward C.J. Tipping netted the Lady Flames' first goal, this time on a blistering slap shot from the right side near the blue line that whizzed over the glove of Miami goalie Emalee Wills.

Thirty seconds later, Liberty junior defenseman Brittany Hymers fired a shot from near the same spot on the opposite side that sophomore forward Courtney Gilmour deflected into the net at the 10:58 mark. Then, less than 30 seconds after that, junior forward Carrie Jickling converted off a lightning-fast counterattack to put the Lady Flames up 3-0.

At the start of the second period, Miami forward Hayley Williams, the ACHA DI player of the year, brought the RedHawks back within 3-1. But Liberty freshman Chelsey Greenwood answered off a feed from the corner for the final score and Liberty senior goalie and tournament MVP Chantal Lischynski shut Miami out the rest of the way.

"We're all just so happy," Lischynski said. "We've been in this position before the last two years and we fell short. It's just so amazing to be able to finish and to be able to win this tournament. We give all of the glory to God.

"I'm very flattered I got (MVP), but I couldn't have done it without our Lord and the team behind me," she added. "I didn't get many shots so that's the reason for all of the shutouts. It's the whole team in front of them that allows the goalie to play well. I thank my team and God for that. I was definitely nervous, but I knew my girls had it. They just iced it down and they don't let anything through. They've got my back 100 percent and I've got theirs."

Stevenson, who had four goals and four assists in five games at nationals, celebrated with her seven senior teammates — including All-Tournament teammates Lischynski and defensemen Madison Fischer and Autumn Kucharczyk — on the ice before and after the trophy presentation.

"We've been here before and it just feels so surreal to finally win and bring home the title for our school (Liberty University)," she said. "I just worked hard and gave it my all. As a senior, I just wanted to leave it all on the ice and do everything I could to help the team win. It's been an awesome four years with this team and to finally win and leave my senior year with a national title is unbelievable."