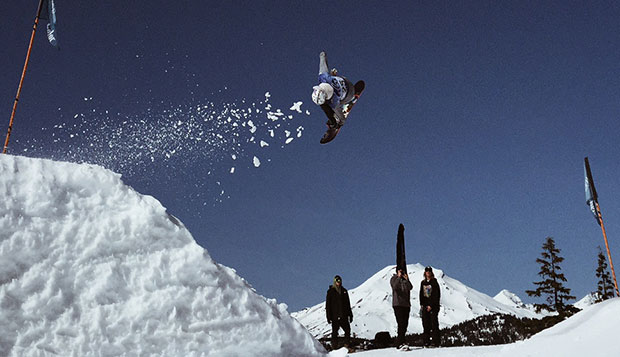 Liberty freshman Bryan Ducharme performs a back 900-degree spin off the last jump on the Slopestyle course, Wednesday at Mt. Bachelor in Bend, Oregon.

"I'm proud of the entire team," Liberty Head Coach Ryan Leeds said. "Everything at nationals is on a much larger scale and I'm proud they are stepping it up and willing to tackle the new features, and pushing through pain when they endure a fall or an injury because they want to do well for their teammates."

The Lady Flames' three competitors, junior Brandy Fronte, senior Brooke Gibson, and sophomore Sydney Beatty, all made the finals of the women's Rail Jam, placing ninth, 11th, and 12th out of 25 finalists to lead Liberty to a third-place finish with 32 points, behind Westminster (8) and Sierra Nevada (22).

Meanwhile, the Flames sent five of their seven competitors — more than any other team — to the men's Rail Jam finals, with a field of more than 70 pared down to 19.

"Having five guys in finals is a huge accomplishment," Leeds said. "We were the only East Coast team to make it into finals."

Senior Kevin Hoff placed eighth individually and freshman Bryan Ducharme took 10th to pace the Flames to a fourth-place finish out of 25 teams represented, behind only Westminster, Western State Colorado, and Sierra Nevada. Senior Isaac Gibson came in 14th and sophomores Brendan McHugh and Michael Kane were 16th and 17th for the Flames in the finals.

"In the Rail Jam, they had a few bigger features our riders don't normally get to practice on, and they were able to adjust and they did well," Leeds said. "There were three lines of rail features — beginner, intermediate, and expert lines — with two features in a row. The judges wanted them to execute on their lines. It was a little more difficult because they had to do two tricks in a row at the start, so they had to land their first trick almost flawlessly."

In Wednesday's Slopestyle competition, riders had an option between a box and a rail for their first feature before going over two jumps, two rails, and a wall ride.

"That was a first for our women to place third in both the Rail Jam and Slopestyle competitions," Leeds said.

Similarly, Liberty's men's team (32 points) took third behind Sierra Nevada (10) and Westminster (24). The Flames featured fourth- and fifth-place individual finishes from Hoff (best first run of 72.0) and Ducharme (best second run of 71.0), their only riders in the 10-man finals for a competition that started with an 80-man field.

"We got strong performances from Kevin Hoff and Bryan Ducharme," Leeds said. "They've been strong for us all season and they placed in the top 10 for us in both Rail Jam and Slopestyle."

Liberty will next compete in Thursday's men's Boardercross, with more than 100 men's snowboarders registered for the event, which will have finals set for 5:20 p.m. (EST). Then on Friday, the three Lady Flames will enter the women's Boardercross at 1 p.m. (EST).

"It's going to be a lot more challenging than what we did earlier this season," Leeds said, noting Sierra Nevada has three very experienced riders who will be traveling to China to compete in the World Cup. "It's a fairly short course, but it's a fun course, with a lot of banks, rollers, and jumps. It'll be a fun race to watch, really fast and tight. Hopefully, we'll fare well, stick to the fundamentals, and concentrate on going fast."

Viewers can tune into the live webcasts of the finals on the USCSA website.