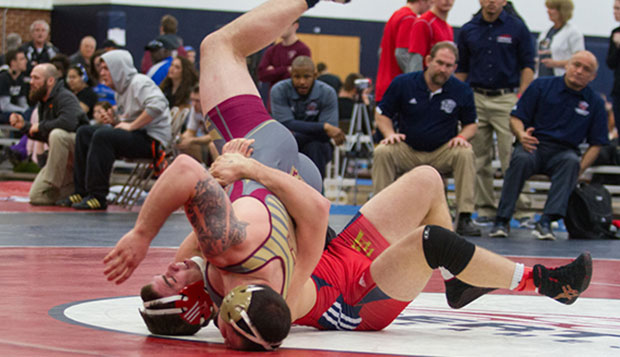 So it was no small feat that No. 1 Liberty University, a month removed from its second National Duals championship, captured the MAC Tournament title for the fourth consecutive year since dropping down from the NCAA Division I level, Saturday in the LaHaye Multipurpose Center.

The Flames claimed seven individual champions in the 11 weight classes, including three by forfeit in finals pitting teammates, to avoid potential injuries before nationals. Liberty accumulated 215 team points to pull away from fifth-ranked Middle Tennessee State (154) and third-ranked Apprentice School (117½), which it had defeated in the National Duals final.

The Flames qualified a total of 19 wrestlers — 17 with top-five finishes and two wildcards — for the March 12-14 NCWA National Championships in Allen, Texas. Last year, with 17 individual competitors, Liberty finished runner-up at the NCWA tournament. In 2013, the Flames placed third with 16 wrestlers.

"We're sparse in a few areas, but other than that, we have a pretty full team going to Texas," said Flames graduate student Josh Pelletier, the heavyweight champion. "We're the only ones that really can get in our way. If we wrestle well, we should be able to take the national championship."

Like the MAC Tournament field, the heavyweight bracket boasted the top three-ranked individuals.  Pelletier (29-5, ranked No. 2) won his first two matches by pin before decisioning Apprentice's third-ranked Ian Jones in the semifinals.

"I beat him at NCWA Duals, too, but he's a good wrestler, so it was a good, tough match," Pelletier said.

"That was a big upset," Pelletier said. "It was a big shock, that's for sure. He hasn't been wrestling very long so it's very impressive. He's put in a lot of hard work."

Liberty sophomore 235-pounder Evan Canady (28-5) earned the trophy for recording the most pins in the tournament — four, including his final match against MTSU's Adam Wells in 1 minute, 34 seconds.

"This is my first tournament title and I've really got to give all credit to God," said Canady, who transferred from NCAA Division III Messiah College last year. "I'm expecting it to be a little tougher at nationals, but I'll be training and getting ready for it."

"It was a good way to finish the season out heading into nationals," said Tatanish, who only took a 10-9 record into the tournament. "It gives me a lot of confidence."

Sophomore Tim Nordan gave the Flames early momentum by defeating Apprentice's Jacob Michael for the third time this season, 12-4, in his 125-pound final.

"He was a familiar face," Nordan said. "The second time I faced him, I won in overtime, so this time, I won a lot more convincingly. The past two weeks, I've been really working hard to push the pace and wrestle my match. I definitely did that today and I just want to give all of the glory and honor to God.

"I just was able to win all of the scrambles," he added of his final against Michael. "I got an escape and a takedown in the first period and that gave me a lot of momentum going into the second. I turned him on top and that's when I knew it was over."

At 141 pounds, sophomore Ryan Diehl (17-3), the reigning NCWA Wrestler of the Year, only had to wrestle one match to defend his MAC crown, pinning East Carolina's Jared Flynn in 20 seconds after receiving a first-round bye and before taking a forfeit from sophomore teammate Ike Podell in the final.

It was Diehl's first action since spraining his ankle at the Virginia Duals.

Liberty senior 165-pounder Chase Boontjer (13-1), the MAC Tournament's Most Outstanding Wrestler last year, also defended his title by holding off Apprentice's Patrick Foxworth 6-4 in the final after trading takedowns and escapes in the closing seconds of the match.

At 184, Liberty senior Keyshaun Ward (16-3, seeded second) dropped a 5-4 final decision to top-seeded Jonathan Roberts of MTSU, who was later named the tournament's Most Outstanding Wrestler. After reversing early in the third period to take a 4-2 lead, Ward allowed Roberts to escape and score a takedown on the edge of the mat 12 seconds later with 1:00 left in regulation.

Canady said Liberty Head Coach Jesse Castro, who was selected the MAC Coach of the Year, and his assistants have kept the team motivated, which will be a key to the Flames' success at nationals.

"We've got to stay disciplined," Canady said. "We have two weeks to prepare for it. At the end of the day, it's going to come down to hard work in the wrestling room and just determination."