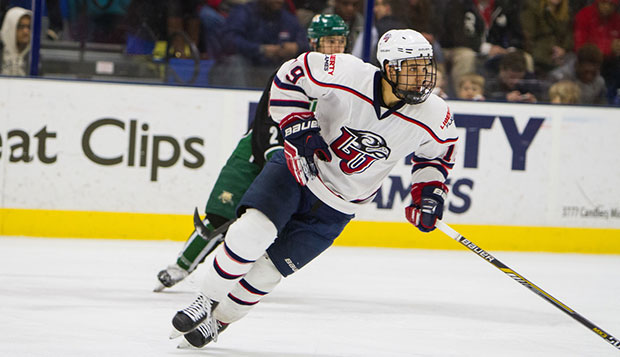 Liberty junior forward Tyson Street works the puck up the ice against Ohio at the LaHaye Ice Center.

Playoff-level intensity was on display in the rematch between Liberty University's ACHA Division I men's hockey team and Ohio, the third-ranked team in the nation, Saturday night at the LaHaye Ice Center.

After the 11th-ranked Flames battled back to tie the contest twice in regulation, Bobcats forward Michael Harris netted the game-winner, his second goal of the night, in the final 1 minute, 44 seconds of an action-packed five-minute overtime.

"Both teams were going for it and that's the type of games you're going to have at the national tournament — great goaltending at both ends, and the pace of that game was unbelievable," Flames coach Kirk Handy said. "I was proud of our guys, the way we rebounded from last night to tonight. It's the effort that we need right there. Every single guy in there tonight gave it their all."

Two high-percentage shots — the first on a five-on-three power play late in the first period and second on a short break from the blue line by defenseman Jake Faiella midway through the third — appeared to be all the offense Ohio's league-leading defense would need to complete the sweep of Liberty.

But the Flames called a timeout with two minutes left in regulation and scored five seconds later, tying the game at 2-2. Senior center Lindsay LeBlanc won a faceoff in the offensive end to senior defenseman Cam Bakker before freshman defenseman Ben Hughes distributed his second assist of the night. He spotted Ryley Egan open in the right corner where the senior forward fired a shot from behind the back redline off the back skate of Ohio goalie Scott Boyd into the back of the net for his second goal of the game.

Boyd, who entered the contest with a 4-0 record with two shutouts and a 0.50 goals-against average, extended his unscored-on streak to seven periods by blanking Liberty in the first, which ended with Harris capitalizing on the two-man advantage by sending a low shot from the top of the right circle past the pads of sophomore goalie Matt Pinel.

The Flames struck back to tie the game at 1-1 with just over two minutes left in the second period when sophomore center Grant Garvin sent a pass from behind the Bobcats' cage along the right boards to Hughes, who unleashed a slapshot that Egan deflected into the net from near the right post.

Ohio outshot Liberty 36-28 on the night and both teams picked up the intensity in overtime.

Liberty generated one of its best scoring chances of the game right off the opening faceoff as Hannon chased down the puck and sent a pass across the crease to LeBlanc, but Boyd snared his shot and gloved Hannon's on an ensuing counterattack off a feed from Bakker.

The Bobcats caught the break they needed in the closing two minutes when defenseman Mike Kretz made a steal on the offensive end and nearly scored on a backhanded putback of a shot by Matthew Hartman moments later. Soon after that, Harris skated the puck from the high point and fired a shot on net that deflected past Pinel through traffic in front of the cage.

"It's unfortunate that they scored right there," Handy said. "We had our chances in overtime as well and it just wasn't meant to be tonight in overtime. Pinel had a good game, our defense played well, and our forwards were back-checking tonight and we had a lot of back pressure, which is great. To come back and tie it up late in the game, that shows a lot of character of the guys in there and it's something to build on, for sure."

Next weekend, the Flames travel to Delaware, host of last season's ACHA DI national championships, for their final road trip of the regular season, Friday at 9 p.m. and Saturday at 5 p.m.