Flames come up for air at USCSA Southeast Region event 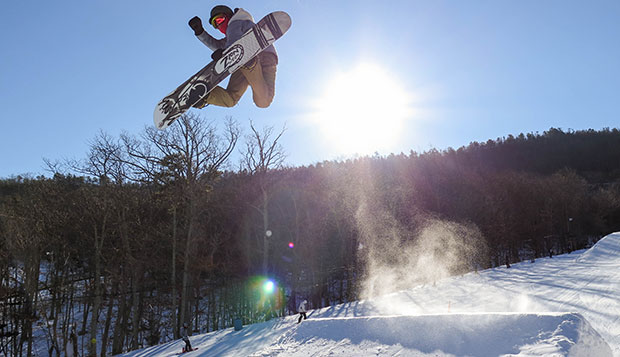 "We came into the season extremely well prepared," Liberty Head Coach Ryan Leeds said, noting the nine men and three women on the travel team all have season passes to Wintergreen Resort, located an hour's drive from Lynchburg, Va. "Part of that is due to getting kids out early at the end of August and getting them on the snow early this winter. That has really paid off."

Due to time constraints, the 60 men's riders were allowed just one run Saturday, with the top 30 advancing to the finals. Snowboarders had the option of taking a line with three jumps or an alternate path with mostly rail features. Regardless of the route they chose, they were scored on three criteria — amplitude, style, and technicality. .

"Everybody pretty much had a really great run," Leeds said. "Bryan Ducharme has lived here for the past year and we knew he was a pretty good rider, capable of winning. He looked smooth and definitely exceeded my expectations. On his last jump, he did a 900-(degree spin), which was a pretty good trick to throw on his last run."

Leeds said Hoff should have received a higher technical score for incorporating a number of switch maneuvers, approaching the three jumps with the opposite end of the board than he normally leads with.

"Between Bryan and Kevin, I knew it was going to be close," he said. "What it came down to was amplitude and style over technicality."

Due to her knee injury, Beatty wasn't able to snowboard until mid-November.

"She only took a couple runs before the Christmas break, which she spent in Florida, so she had no time on snow until she went to Wintergreen last Thursday, the day before we left for (Massanutten)," Leeds said. "Just coming off a knee injury, for her to come in and take first was a pretty big accomplishment."

He said Beatty, Gibson, and Fronte were the only three women in the competition to execute all three jumps on both of their runs.

"The third jump was the biggest and Sydney was able to clear it and add some pretty big style points," Leeds said. "They all had pretty good amplitude. What set Sydney apart was the type of grabs she did."

Leeds was particularly pleased with the way Liberty's riders, trained at Liberty Mountain Snowflex Centre, performed on snow, especially since the competition was held at night.

"When you go to slopestyle events on snow, conditions and features can change on most every run," he said. "All of our athletes had to complete their second run under the lights and when it gets dark out, things get cooler and icier. The fact that they were able to land all of their runs in those types of conditions was pretty impressive. With more time on snow, I believe we can take one through nine in our next (men's) competition."

The Flames and Lady Flames will next compete in a Slopestyle event Jan. 31 and a Boarder Cross on Feb. 1, both hosted by ASU at Beech Mountain Resort near Boone, N.C.

They will have a near home-course advantage for the Feb. 19-21 USCSA Regional competition at Wintergreen before sending a complete team to the March 1-7 USCSA Nationals at Mt. Bachelor in Bend, Ore.