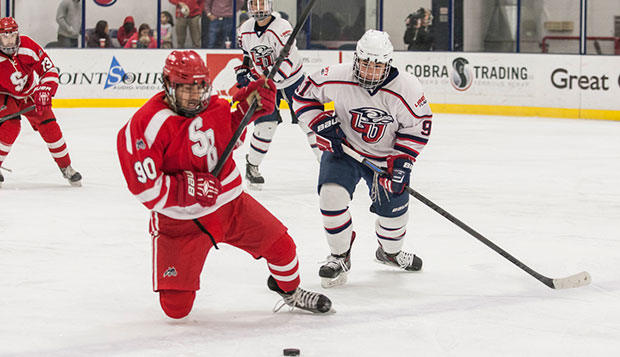 "They came out and scored 30 seconds into the game and we battled back and were able to score the next three goals," Flames Head Coach Kirk Handy said.

Liberty's Ryley Egan worked with fellow senior forward Lindsay LeBlanc to score on a two-on-one break off an initial feed from freshman forward Luke Hannon, tying the game at 1-1. Freshman forward Paul Lamoureux gave the Flames their first lead by deflecting in a shot from the point taken by senior defenseman Cam Bakker, set up by junior forward Kyle Garcia.

Then, junior forward Tyson Street extended the lead to 3-1 with a shorthanded score.

"Tyson Street came down and made a fantastic shot to beat the goalie," Handy said.

Liberty (17-6-4) capitalized on three power plays while not allowing the Seawolves (17-4) to convert on a single man advantage against Flames freshman goalie Josh Halpenny, who started his second game since returning from an injury.

"Josh played well for us and our penalty kill was excellent tonight," Handy said "We killed off all of our penalties and were able to score a shorthanded goal, which was obviously big for us."

After Stony Brook got one goal back near the end of the first period and tied it at 3-3 just over five minutes into the second, Liberty responded to reclaim the lead, 4-3. Working off an initial assist from freshman defenseman Ben Hughes, Hannon scored off a pass from fellow freshman forward Colt Steele, who skated toward the goal before distributing the puck.

The Flames got their last three scores on power plays to break a one-goal game wide open.

"(Assistant coach) Jake (Hannon) has done a great job on our power play, not only devising a system but having the right players to make our power play successful," Handy said.

Bakker scored the first with just over three minutes left in the second off assists from Egan and LeBlanc before Hannon finished a feed from Hughes and Egan scored off assists from Hannon and junior forward Bram Erickson with 5:34 to go.

"Game One's goals are accomplished," Handy said. "Now, we're looking forward to going back at it again (Sunday at noon). It's a real quick turnaround, but I'm confident our guys will be ready to go."