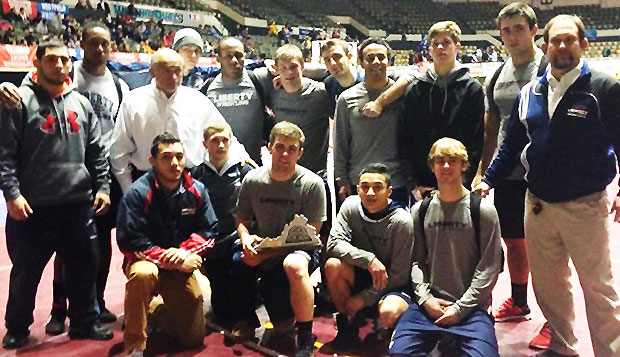 As the second seed in the American College Division, the Flames cruised past Mid-Atlantic Conference rival Apprentice School, 40-12, in Friday's first round before defeating Anderson University, an NCAA Division II team, 26-18 in Saturday's semifinals to advance to the championship match against top-seeded UNC Pembroke.

"It was bittersweet," Flames Head Coach Jesse Castro said. "It was unprecedented for any NCWA team to make it to the finals of any division of the Virginia Duals. Still, no NCWA team has ever won it."

The momentum shifted in the Braves' favor at 141 pounds where Daniel Ownbey used a late takedown to score a 6-5 decision over Flames sophomore defending NCWA national champion Ryan Diehl and Hayden Fry doubled up Liberty sophomore Ike Podell, 12-6 at 149.

At 157, Flames senior Chase Boontjer defeated Joey DiMartino, 5-2, to extend Liberty's lead to 15-5, but the Braves won the final five bouts. After UNCP's Mikey Thomas edged Keyshaun Ward 4-3 in a 184-pound bout that could have gone either way, Stuart Nadeau pinned Matt Reynolds at 197 pounds to all but clinch the team triumph.

"The finals was an up and down rollercoaster," said Flames 174-pound senior Josh Sturgill, who sat out the tournament due to injury. "We had the lead really early and slowly started to lose it."

Liberty heavyweight Josh Pelletier would have needed to pin Chris Giddens to tie the match, but their bout went into overtime tied at 1-1 and a second OT tied at 3-3 before Giddens recorded an escape and a takedown in the final 30-second rideout.

Both teams lost one point for unsportsmanlike conduct, at 141 pounds for UNC Pembroke and 165 pounds for Liberty.

The Flames return to Hampton Roads next Saturday to compete in the Ship Builders Invitational, hosted by Apprentice School in Newport News, Va.