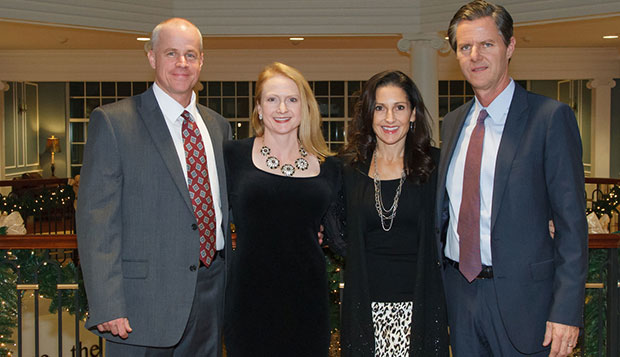 While testifying to how far Liberty University's Club Sports department has come in such a short time, Senior Vice President for Auxiliary Services Lee Beaumont credited President Jerry Falwell as the visionary behind the program's rapid rise. He then introduced Falwell as the third and final member of the inaugural Club Sports Hall of Fame class, Friday night in the Hancock Welcome Center.

"Back in 2007-08, we had five teams, about 82 athletes and virtually no administration," Beaumont said. "Fast forward about seven years, we have 32 teams, over 500 competing athletes, 200 students supporting us in various roles, we also have a top-tier weight-lifting facility and fully staffed training room. We have academic support, we have great facilities to play in now, and we are the top Club Sports department in the country. We have set the example.

"A lot of people have done a lot of things to make all of this happen and I'm deeply grateful for all of their contributions," he added. "It shows in the classroom, shows on the recruiting trail, and obviously shows on the field when you look at our success. However, it's really one man's vision that's got us here, and that man is Jerry Falwell."

Falwell has followed in the footsteps of his father, Dr. Jerry Falwell, Liberty's founder, in establishing the Flames' Club Sports program. Modeled after the top NCAA Division III programs in the country, it strives to emulate, but not compete with, Liberty's NCAA Division I Athletics department.

"I wanted to make sure Liberty had more recreational opportunities, more sports opportunities, so Lee and I started talking and he and Kirk (Handy, Liberty's senior director of campus recreation) and (Vice President for Financial Research and Analysis) Richard Martin and others convinced me how good it would be for the spiritual health of these kids, for student retention and just the morale of the campus," Falwell said. "So we finally turned the corner (financially) and started building these teams, some of them in sports I hadn't even heard of."

One of the founding Club Sports programs at Liberty was men's volleyball, which thrived in the 1980s before nearly folding in the 1990s. By the time newly inducted Hall of Fame member Johnathan Willis arrived in 2003, the program was still struggling. Now an assistant coach on the NCAA DI women's team, he helped rebuild the men's squad, first as a middle blocker and later as its head coach. Willis has served in various coaching roles in the community. Willis' presenter, Brandon Aronson is a former Liberty indoor and professional beach volleyball player who coached alongside Willis at Brookville High School.

"From the first day he stepped in the gym, I remember, he had so much intensity, so much passion," Brandon Aronson said of Willis, who's married to Liberty beach volleyball Head Coach Rachel Willis. "He just brings fire and passion like you couldn't believe. He spent that year, that season (at Brookville) just pouring his heart into our kids and investing in them. It was just unbelievable to watch him soak up the game and the coaching and to see what he was willing to give.

"He has a heart to breed champions, to win and invest in people and most of all, specifically in this venue as a coach, to show Christ to every athlete he is involved with," Aronson added. "That to me is one of the highest compliments or pieces of praise that I can give an individual, because regardless of win or lose, his heart is to know that the people he interacts with, coaches, athletes and everyone, saw Christ."

Nick Reichenbach, Liberty's first men's hockey team captain, came down from Michigan to serve as presenter for Club Sports Hall of Fame charter member Dr. Gary Habermas, a Detroit native who never played the game but served as the Flames' head coach from 1985-94.

"Most of you know high-brow Dr. Habermas, the Dr. Habermas of 36 books fame, thousands of speeches all over the place," Reichenbach said. "I'd like to talk about the down-to-earth Gary, or as we called him, Habs. He's probably the best hockey coach to actually never step on the ice."

Reichenbach related a story about Liberty's first game played with Habermas at the helm, marred by a fight, which Habermas said Reichenbach started by checking the opposing team's captain into the boards. that the all-out brawl lasted at least 20 minutes, in Habermas' estimation.

"I was the only coach of the hockey team in those days and when I realized what was happening, I turned to my right to say, ‘I don't want any of you guys leaving the bench,' when I realized I was the only one standing on the bench," said Habermas, who joined them on the ice to try to bring order to the chaos. "I had about five guys on my team who would rather fight than play hockey, in fact they were much better fighters.

"We won the game by the way," Habermas added, "and that started Liberty's legacy. After that fight, we never lacked for fans."

Back then, as still holds true today, the men's hockey team was the third best-attended sport at Liberty behind football and men's basketball, even though students had to travel more than an hour to Roanoke to see the late-night-approved events.

Reichenbach said many of the players on the team Liberty fought with actually became friends of the Flames over the years.

"That's the irony of the whole situation and that tells you a lot about Habs' coaching style, which was about motivating relationships," he said, noting Habermas officiated his wedding.

Handy is privileged to have formed relationships with all three members of the inaugural class, who will be introduced during Saturday's men's hockey game between Liberty's ACHA Division I team and Virginia Tech's DII squad, set for 7 p.m. in the LaHaye Ice Center, where the Hall of Fame will be housed.

"It was a thrilling night, to have our department, after seven years, culminate in something like this," he said, noting Athletics Hall of Fame Director Kevin Keys played an integral role in guiding Club Sports Hall of Fame Director Jake Hannon and his committee chairman Derek Young through the process. "Our committee did an excellent job picking three fantastic people."