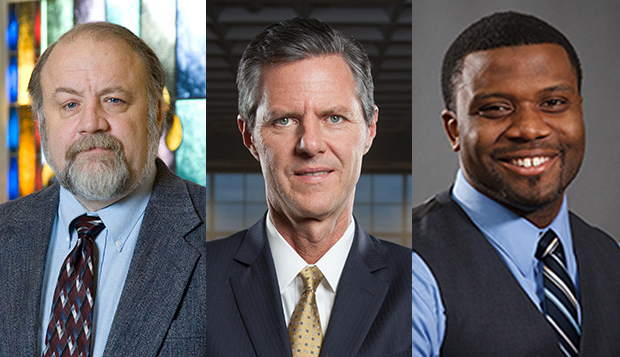 The first three members of the Club Sports Hall of Fame, Dr. Gary Habermas (from left), President Jerry Falwell, and Johnathan Willis, will be inducted on Dec. 5.

The three members of the inaugural class of Liberty University's Club Sports Hall of Fame were announced this week and will be enshrined at the program's first induction ceremony on Dec. 5 in the Hancock Welcome Center.

Liberty President Jerry Falwell will be honored that night along with Dr. Gary Habermas, who coached the men's hockey team from 1985 to 1994 and was instrumental in establishing the program in the ACHA, and Johnathan Willis, a former men's volleyball player and current assistant coach of the Lady Flames' NCAA Division I women's volleyball team.

Following the 6 p.m. induction ceremony, all three will be introduced as charter members into the Hall of Fame during intermission of the Flames' ACHA Division I men's hockey game against Division II rival Virginia Tech on Dec. 6. That contest is set for 7 p.m. in the LaHaye Ice Center, where their Hall of Fame plaques will be housed in the lobby area to the right of the main entrance.

"This being the first class, we weighed heavily into account each candidate's contributions to building their sport and Club Sports in general at Liberty University," said Jake Hannon, an assistant DI men's hockey coach who serves as director of both the Club Sports Hall of Fame and the Varsity Club, open to NCAA Division I Athletics as well as Club Sports graduates.

President Falwell has played a pivotal role in the development of a Club Sports program that is unlike any other in the country, modeled after an NCAA Division III athletic department. During his presidency, the program has grown from five teams with 82 athletes in 2007 to 32 teams with more than 500 athletes in 2014.

Willis was a middle blocker and outside hitter for the men's indoor volleyball team from 2003-05 and again in 2009, when he received East Coast Championships all-tournament honors. The next year, as coach, he guided the Flames to a third-place finish at the National Collegiate Volleyball Federation Championships. In addition to assisting the women's indoor team, Willis also serves as assistant to Rachel Willis, his wife and head coach of the men's and women's beach volleyball teams.

Derek Young, coordinator of business operations for the Club Sports department and chair of the nine-member Hall of Fame committee, presided over the entire ballot process.

Candidates are required to be at least five years removed from their sport, rendering more recent athletes, coaches, and contributors to many of the 32 Club Sports programs ineligible for induction at this time.