Midshipmen sink Flames in near replay of playoff setback 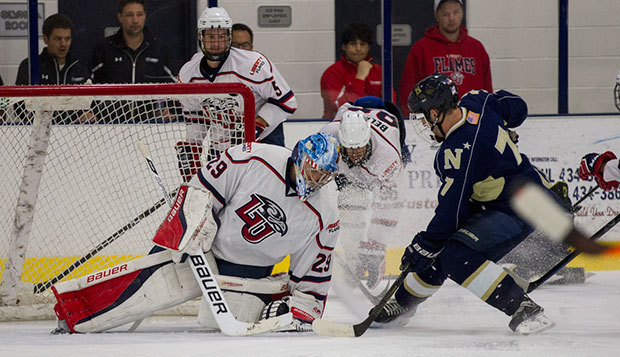 Liberty University's ACHA Division I men's hockey team gave up two-goal leads three times in Friday night's league opener at the LaHaye Ice Center before losing to the Naval Academy, its nemesis from last postseason, 5-4 in a shootout.

"It's a rivalry for sure, going back to nationals," Flames senior defenseman and captain Matt Sherry said. "If there wasn't a fire in our bellies before, there's one there now for sure. They don't quit and we've learned that for a second time now."

The Flames (3-0-1), who outshot Navy 52-30, were plagued by penalties, allowing the Midshipmen (1-0) to capitalize on the man advantage multiple times. The end result was a near replica of the 4-3 final in the second round of last year's ACHA National Championships, won by Navy in overtime.

"It's just one of those teams where we both have that same gritty style and it clashes and you can see it on the ice," Sherry said. "Unfortunately today we weren't disciplined and they were and they capitalized on it."

Liberty netted two goals in the first 10 minutes before Navy trimmed the gap to 2-1 with a power play goal in the final minute.

Junior forward Kyle Garcia assisted the first score after making a steal near the top of the left offensive circle. From there, he spotted freshman forward Colt Steele cutting through the right crease for a quick finish, the first goal of his Liberty career, and a 1-0 lead with 13:20 left in the first period.

Three minutes later, the Flames found the net again, this time on a power play set up by perimeter passing from senior forward Ryley Egan to sophomore defenseman Chase Harris to freshman forward Grant Garvin, who sneaked in a wrist shot from the top of the left  circle to make it 2-0.

Navy drew within 2-1 with a 4-on-3 on a slapshot from the top of the right circle by Tom Buckley off a cross-ice assist from defenseman Steven Knopf.

Freshman defenseman Ben Hughes  extended Liberty's lead to 3-1 midway through the second period by rocketing a slapshot off a short feed from freshman forward Hannon that beat Navy goalie Matt Truninger to the top shelf.

Navy started the third period on a five-on-three power play and didn't waste any time in converting, with forward Dan O'Hear rifling a short shot from deep in the right circle past Liberty sophomore goalie Matt Pinel into the top right corner of the net.

The Midshipmen remained on the five-on-three, with Sherry, fellow defensemen Cam Bakker and Peter Shantz, and Hannon in the penalty box following infractions late in the second period.

"We just had a lot of retaliatory penalties," Sherry said. "There were a lot of opportunities where we could have had the advantage and instead of taking the hit, we retaliated and we were in the box as well. Unfortunately, the special teams are what killed us tonight."

The Flames managed to kill the rest of that penalty before going on a power play of their own after Kyle Miller was checked across the crease and crashed into the boards on a breakaway. Freshman forward Luke Simon quickly padded Liberty's lead back to two goals at 4-2 with 16:19 remaining in regulation by slipping a wrist shot from the top of the slot past Truninger.

But Dustin Oberlander pulled Navy back within 4-3 with a spectacular move across the crease before depositing the puck into the upper left corner with 13:47 to go and Trent Lulow knotted the score at 4-4 three minutes later by cleaning up the open rebound of a shot by Derek Frawley that glanced off the right post.

"It was the difference in the game, the times we could have had power plays that we took a penalty instead," Liberty Head Coach Kirk Handy said. "It was a 4-2 game and we take a couple ill-advised penalties and they come back. We kept letting them back in the game. It's definitely something that we addressed with the guys (in the locker room) and we'll correct (in Saturday's 3 p.m. rematch at LaHaye)."

In the five-minute overtime period, the Midshipmen generated more quality scoring chances, forcing Pinel to come up with some clutch saves. Hannon gave the Flames the early edge in the shootout, when Pinel made three huge stops before allowing goals by Buckley and Frawley, who finished in the five hole from near the left post to ice the victory.

"It was very entertaining for the fans, not so much for the coaches," Handy said. "We're going to learn from it and be better. (Saturday's) a new day and we're looking forward to it."