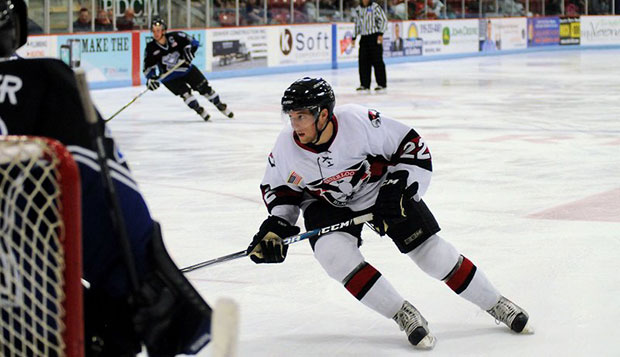 Luke Hannon last played for the Waterloo (Iowa) Black Hawks in the United States Hockey League before spending the past three years as a coach in Buffalo, N.Y.

Luke Hannon's hockey career was on a three-year hiatus before he landed at Liberty University just in time for Monday's first day of classes, three weeks before the start of the ACHA Division I men's hockey season.

"I think the Lord put it on his heart to play here," said Flames assistant coach Jake Hannon, Luke's older brother who played defenseman for Liberty from 2011-12. "God opened some doors for (his registration) to get done quickly and get him on the ice. He'll be great for our team chemistry and it's a great opportunity for Luke."

"A week later, it really hit me I needed to make a change in my life, to grow as a person and try to develop as a hockey player while I'm here," he said, noting Liberty Head Coach Kirk Handy has recruited him for the past two years. "I really felt like it was the right fit and Jake being here as well kind of solidified the decision for me."

He has always wanted to emulate his older brother and followed his collegiate career at Army, Amherst, and Liberty.

"Jake played a major role in my hockey development as a young kid," Luke Hannon said. "I was always striving to be as good as him, to keep up with the older guys."

A prolific scoring forward, Luke Hannon, who's 23, hasn't played an official game since 2011. That was his last season with the Waterloo (Iowa) Black Hawks in the United States Hockey League (USHL).

Hannon scored 10 goals and distributed 19 assists for the Black Hawks before being sidelined with an injury that opened the door for him to coach hockey.

"I've been running a youth hockey program for the past two years and coaching the local Williamsville North High School team," said Hannon, who has three years of experience as an instructor in New York and also served as head coach of the Buffalo Prospects. "I've been able to learn more about the game as a coach and now I'll be able to translate everything I've learned back onto the ice as a player, so it's a pretty unique opportunity for me. I am excited to start a new chapter in my life. I look forward to rejuvenating my career and hopefully reaching my full potential, to become the best player I can and do something special here at Liberty."

One of the best seasons of Hannon's junior career came with the Ajax Attack in Canada. He scored 27 goals and distributed 32 assists in 43 games in 2008-09 before netting 20 goals and 24 assists the following season with the Jersey (N.J.) Hitmen of the Eastern Junior Hockey League.

"He's definitely a goal-scorer and a playmaker," Jake Hannon said. "He's got good hands and a good shot."

Luke Hannon skated with the Flames for the first time Sunday and developed an immediate bond with his new teammates in the LaHaye Ice Center.

"The guys were very welcoming and understanding of my position in life and very supportive of my choice to come to Liberty," he said. "I feel very welcomed and very at home here."

He has stayed in condition during his time away from competitive hockey and expects to catch on in time for the Flames' Sept. 5 home and season opener against the Potomac Patriots' Junior A team.

"Over the next couple of weeks, we'll do some pretty heavy training and I feel like I'll be in full stride come game time," Hannon said. "I hope to be an impact player. I'm going to earn everything that's given to me here."