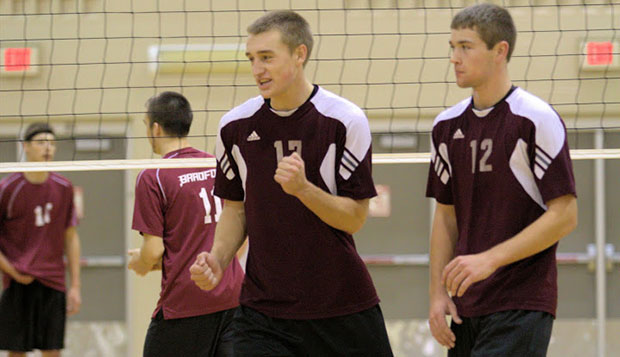 Luke Werth (left) from Bristol, Wis., will rotate in at the middle blocker position with sophomore Si Herschberger next year.

After receiving its first-ever National Collegiate Volleyball Federation (NCVF) ranking and placing 34th in the Division I-A bracket of the national championship tournament this spring in Reno, Nev., Liberty University's men's volleyball team is raising its sights for next season.

"We made some great leaps and bounds this year and we've already set team goals for next year," said Flames Head Coach Bryan Rigg, who was named the NCVF Coach of the Year after guiding his team to a runner-up finish to Virginia Tech in the Eastern Intercollegiate Volleyball Association (EIVA) South Division I tournament and qualifying for the EIVA East Coast Championships. "We want to be No. 1 in the South, we want to place first or second in the East Coast Championships, and we want to be one of the top 16 teams (in the DI-A Gold Bracket) at nationals. Those are certainly attainable goals."

To improve the Flames' chances, Rigg has hit the recruiting trail early and often this season, receiving six commitments for next year.

The biggest so far is Luke Werth, a middle hitter from Wisconsin who is 6 feet, 5 inches tall with a standing reach of 8 feet, 3 inches and a blocking height of 11 feet. He will replace graduate student Ryan Culkin and rotate in with Si Hershberger.

"Luke has all the physical tools that Ryan had and he's been playing volleyball for four or five years now, which puts him ahead of Ryan," Rigg said. "(Hershberger and Werth) should be the best two middle hitters in the league."

Liberty returns Josiah Williams, one of the best liberos in EIVA Division I South. Next year, he will be complemented by defensive specialist Sam Wyman from Pennsylvania, who will fill the shoes of graduating senior Steven Abbott.

"The two things we did best this year, which made us competitive, was our passing and our blocking," Rigg said. "So we're taking something that was our strength this year and making it even better, which is exciting."

Another promising prospect is Sam Kline, a 6-3 outside hitter from Ohio, who will provide depth behind Kevin Snyder (the Flames' leader in kills this year), Sam Eisbrenner, Kyle Beaumont, and Joel Marselus, who is returning from an injury.

"Our defense was stellar, but our offense struggled at times, particularly on the outside," Rigg said. "Joel will be getting healthy again and with Kyle having a year of practice under his belt, he's only going to improve. We're looking at a great season."

The Flames have also received commitments from opposite-side hitters Delsean Griffith and Andrew Glover and defensive specialist Troy Brown. Rigg is on the verge of landing another setter to back up rising senior Ethan Chase.

"This is definitely the strongest recruiting class we've ever had," Rigg said.

"We stayed and watched the quarterfinals and realized we were on level with those teams in a lot of ways," Rigg said. "We were playing teams we're within striking distance of, which is great. If we just work harder in practice, add two more inches to our vertical leaps, we'll be there."

To prepare for next postseason, when Liberty could host both the EIVA DI South tournament and East Coast Championships, Rigg plans to have the Flames travel to some challenging tournaments, possibly the Michigan State University Hardwood Classic in the fall and the Spring Shootout in Florida.