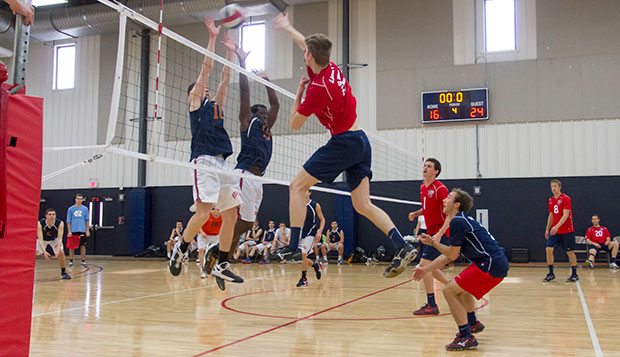 UPDATE: Liberty defeated the University of Pennsylvania, 25-18, 25-20, before losing to 16th-seeded Air Force Academy 23-25, 29-27, 15-12, in Friday's final two rounds of pool play. The Flames will be the second seed in the Bronze Bracket and face Michigan State University in the first round of single-elimination playoffs at 11 a.m. EST.

The Aggies advance to the Gold Bracket of Saturday's championship playoffs with the win. The Flames, meanwhile, must play the University of Pennsylvania, Friday at 2:30 p.m., and Air Force Academy, immediately following the conclusion of that match at 3:30 p.m., to try to get into the Silver Bracket to contend for 17th through 32nd place. If they do not win both matches, the Flames may fall into the Bronze Division.

The tournament will be reseeded for the three 16-team divisions of Saturday's competition, which is single-elimination.

"At this point in the tournament we're aiming for a No. 17 national ranking," Liberty Head Coach Bryan Rigg said. "If we win our first game (in Saturday's Silver Bracket), we'd be ranked in the top 25, which would be great."

Texas A&M used a deceptive style of attack that the Flames hadn't faced before.

"Texas A&M has a really complicated offensive system," Rigg said. "They didn't have a lot of big players, but they used a lot of trickery. Most teams we've faced set a lot of high balls. (The Aggies) set a lot of quick, trick plays. It was a learning experience for us."

He said Texas A&M wasn't necessarily the better team, but the Flames beat themselves.

"We missed nine serves in two games," Rigg said. "That's nine free points. Everybody was slow, the passing was not as good as (Thursday, in a first-round win over UCLA). And we had almost no blocks, which is normally our strength.

"In the second game, we went point for point with them, but we missed a few serves and we weren't getting the key blocks that we normally get," he added.