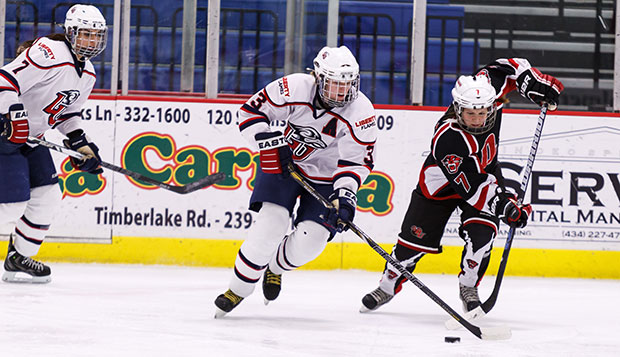 Sophomore forward Carrie Jickling (3) scored the last two goals in the Lady Flames' 3-0 triumph over the Bulldogs that sends them to Saturday's 3:30 p.m. semifinal against Miami (Ohio).

Playing its third game in 30 hours, Liberty University's ACHA Division I women's hockey team might not have had its usual spring in its skates for the start of Friday afternoon's showdown with Adrian College at the ACHA DI National Championships.

By the time the Lady Flames clinched a return trip to Saturday's semifinals with a 3-0 victory over the Bulldogs in the third and final round of pool play, their energy level was renewed and their spirits revived.

Junior defenseman Madi Fischer scored the first goal five minutes into the second period and set up the second by sophomore forward and assistant captain Carrie Jicking in the final four minutes of regulation at Gold Ice Arena in Newark, Del.

"Our three forward lines really worked well," Liberty Head Coach Paul Bloomfield said. "Carrie got the goals that we needed. She's a leader of the team. Those people have to step up, like (senior captain) Courtney (Fischer) did last night," in a 4-4 tie against Robert Morris Illinois (RMI).

"That was a very physical game last night," Bloomfield added. "This was a much cleaner game."

Rhode Island will take on second-seeded Massachusetts in the other Final Four matchup at 6:30 p.m.

Liberty sealed the second semifinal selection out of its four-team pool even before RMI (1-1-1) defeated UMass (2-1) in its final game on Friday. That's because the first tie-breaking factor favored the team that allowed the fewer goals and the Eagles (seven) had given up one more than the Lady Flames (six) prior to facing off with the Minutewomen.

Liberty lost to UMass 2-1 in the first round of pool play while RMI dropped a 3-2 overtime decision to Adrian.

In Friday's game against the Bulldogs, Adrian senior goalie Emily Michelin entered the game with a 1.47 goals-against average and a 0.94 save percentage with four shutouts, including one against the Lady Flames on Oct. 3 at Adrian. But it was Liberty junior Chantal Lischynski, who started in goal as a freshman at nationals in 2012, who posted her third shutout of the year, and it couldn't have come at a more critical time.

"Chantal did a great job in net," Bloomfield said of Lischynski, who made 17 saves. "Chantal is strong and experienced. She gets herself pumped up for these games."

Early in the second period, Fischer gathered a puck left by junior forward Sarah Stevenson and senior forward Nikki McCombe in the left corner. She showcased fancy stickwork and maneuvered between two Adrian College defenders along the left endline before threading the puck through the pads of Michelin for a 1-0 lead.

"It was a pretty square game today," Bloomfield said. "It could have gone either way. The momentum started to roll our way when Madi got that goal. Madi did a great job."

He credited both Fischer cousins as well as freshman forward Courtney Gilmour for helping to turn the tide in the Lady Flames' favor.

"Courtney was everywhere," Bloomfield said. "That was the best game she's played with us."

In the third period, Liberty added an insurance score with just under four minutes remaining in regulation when Madi Fischer possessed a free puck near the top of the Bulldogs' right circle and sent it into the slot for Jickling, who unloaded a short-ranged slap shot past Michelin into the upper netting.

Jickling missed a golden opportunity to pad the lead when her backhanded shot on an open-net breakaway veered just wide left of the goalmouth. But she redeemed herself and capitalized on a shorthanded opportunity with the Bulldogs on a six-on-four, one-timing a shot from the left side of the red line into the back of the open net for the final score with 2.4 seconds to go.