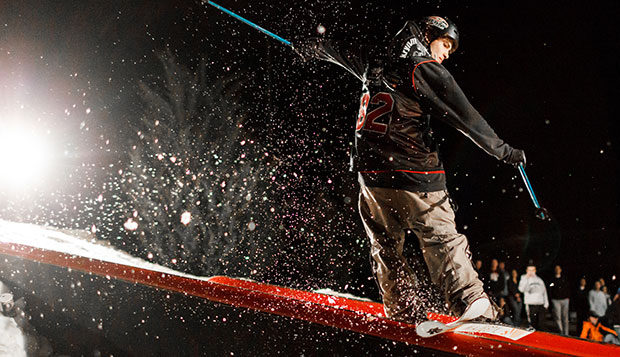 "Three of our guys finished in the top 10," Liberty Head Coach Ryan Leeds said as the slopestyle events were starting up Wednesday morning on Whiteface Mountain at Lake Placid, N.Y., site of the 1980 Winter Olympic Games.

The Rail Jam is a new event added to the national competition this year and the Flames made the most of the opportunity to implement the skills they've perfected at the Liberty Mountain Snowflex Centre.

"Isaac Gibson did really, really well," Leeds said. "He surprised me a lot. Kevin rode up to his potential and Brendan McHugh and the rest of the team were showcasing the kind of maneuvers they've been doing all year."

The Flames finished second out of 10 teams overall with 21 points, behind only Westminster College (15 points) and ahead of Sierra Nevada College (25), Western Colorado State University (30), and the University of Virginia (46), a Southeastern Conference rival.

In the women's competition, Liberty placed seventh with 50 points, led by freshman Sydney Beatty (tied for 15th) and junior Brandy Fronte (tied for 17th). Westminster won that event as well with 13 team points, ahead of Sierra Nevada (25), the College of Idaho (38), and Virginia (38).

Liberty senior Tim Steltzer was the seventh individual place-winner out of 33 competitors in the men's freestyle skiing Rail Jam, an event dominated by the University of Colorado-Boulder (10 points), which had four of the top six finishers. Steltzer paced the Flames to a seventh-place showing out of 14 teams with 75 points.

In Wednesday's slopestyle competition, two of the Flames' six men's snowboarders — Gibson and Hoff — advanced to the 12-man finals with qualifying runs of 50.7 and 47.3, respectively. Hoff wound up placing 10th and Gibson 11th in the individual standings to lift Liberty to a fourth-place team finish, matching last year's showing.

Liberty was the only men's snowboarding team from the East Coast represented in the finals, with most of the others from out west. Flames junior Zachary Bukolt and McHugh nearly advanced with qualifying runs of 36.7 and 36.0, respectively, to place 16th and 17th overall.

Fronte also qualified for the women's snowboarding finals to lead Liberty to a fourth-place team finish.

Steltzer fell on his men's freestyle skiing run and did not advance.

An ongoing snowstorm that was expected to add 18 inches to the base at Whiteface diminished visibility for riders and slowed down their runs.

"There's a lot of good schools here, good riders from out west," Leeds said. "They only get one qualification run so they're really going to have to put down a run they know they can land as opposed to trying some of their tricks. There's no doubt in my mind things would have been different on another day, but we had a blast and we definitely made a name for ourselves out here."

The competition is being webcast live by the USCSA.