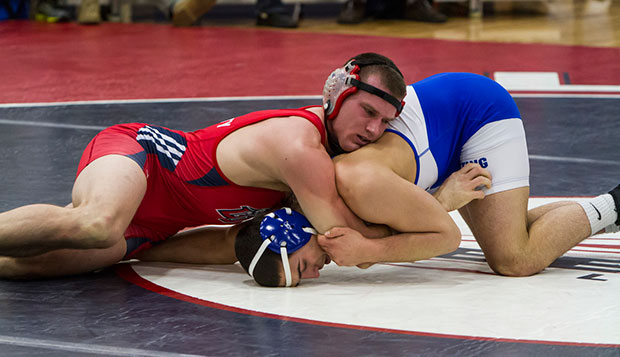 Senior 184-pound wrestler Royal Brettrager was one of seven individual champions for the Flames.

The Flames surpassed the number of individual champions from last season by landing seven winners in the 11 weight classes and racked up a total of 219 points to pull away from runner-up Middle Tennessee State and third-place Apprentice School.

"That was a nice precedent for us," said Liberty Head Coach Jesse Castro, who was selected MAC Coach of the Year for the third season in a row. "Seven champions, that's pretty good.  We wrestled really well. I'm real proud of the guys. They picked it up. They had real nice camaraderie. They were really supporting each other."

Out of the 23 wrestlers Liberty entered, 17 qualified individually for the March 13-15 National Collegiate Wrestling Association National (NCWA) Championships in Allen, Texas by placing in the top six in their respective weight classes. Last year, the Flames placed third at nationals with 16 wrestlers competing.

Boontjer earned the MAC Tournament's Most Valuable Wrestler award after winning his quarterfinal match by 16-1 technical fall, scoring an 11-1 major decision in the semifinals, and recording a 16-0 tech fall of returning all-American Austen Brower from the College of William & Mary in the final.

The Flames only have a week and a half to prepare for NCWA Nationals, where the top two contenders will be Grand Canyon University out of Arizona and Shorter University from Georgia.

California Baptist and McKendree University, last year's national champion and runner-up, respectively, have made the transition to NCAA Division II this season and are both ranked in the top 20.

Liberty's bid to host next season's MAC Tournament, as it did last year, was approved.