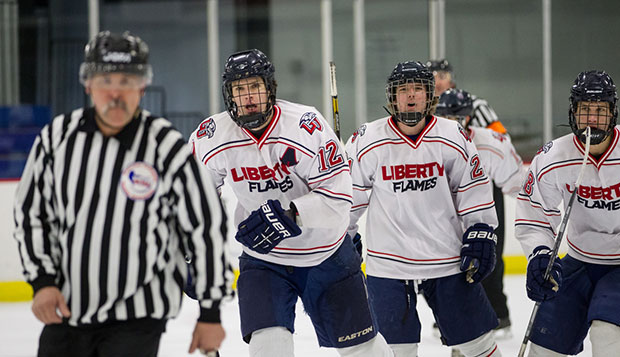 All three of the seniors on Liberty University's ACHA Division II men's hockey team scored in the second round of the Southeast Region Tournament on Sunday at the LaHaye Ice Center, signing, sealing, and delivering the Flames' first DII National Championships bid since 2006 with a 4-2 win over Miami (Ohio) University.

"I can't even describe it," said senior forward Bobby Cervone, who scored the go-ahead goal with 8:12 left in the third period. "All of these guys have worked so hard all year. This was our goal from the beginning of the season and here we are."

Senior forward Brad Docksteader, the Mid-Atlantic Collegiate Hockey South Division player of the year, had his family from Ottawa, Ontario, in the crowd cheering him and the Flames to victory.

"After five years on the team, and this our fourth straight year of being in this second game of regionals, I really can't believe it," Docksteader said. "It hasn't even registered yet, but we're excited to be going into nationals for the first time. Everyone's bruised up and tired and going into the third (period), and it took some motivation, but we were able to get through and bounce back and get some goals, and it was a really exciting way to finish it off."

Docksteader got the Flames on the scoreboard with five and a half minutes left in the first period when he took the puck behind his own net from junior defenseman Clinton Nigh, skated all the way up the ice, and maneuvered past a defenseman before threading a low shot from deep in the right circle inside the left post.

"It was an exciting goal to get, first goal of the game, last home game of my career," Docksteader said.

Miami scored the equalizer early in the second period when freshman forward Ben Romanski won a faceoff back to freshman defenseman Mike Rispoli, who lined a low shot from the top of the right circle past Liberty junior goalie Cary Byron inside the left post.

The RedHawks then seized a 2-1 lead two minutes into the third period when Brad Annas, cutting into the left crease, finished a shot from the right point by Sam Buddenbaum.

"They were a tough matchup," Liberty Head Coach Chris Lowes said. "They're physical, they're fast, and they're deep. We generally try to shut down a team's strong line and they had two real strong lines."

Annas' goal set the stage for the Flames' dramatic three-goal, third-period resurgence, ignited by sophomore defenseman Nate Arbour's third goal of the year off a cross-crease assist from freshman defenseman Ryan Sidun with 9:36 remaining in regulation.

"We felt the energy go out when they got their go-ahead goal," Lowes said. "But guys just stepped up and we got the (equalizer) and that was the big relief. We knew from there, we got a little more confidence back."

Less than a minute and a half later, Flames senior forward Bobby Cervone chased after a puck cleared by freshman forward Jordan Barstead that got past Miami freshman defenseman Jimmy Berger near the red line and accelerated through the neutral zone before lifting his shot into the top right corner of the cage, over the glove of RedHawks goalie Taylor Ley.

"Barstead made a great play against the boards," Cervone said. "He chipped it out of the zone and the defenseman mishandled it and I was able to walk in and score."

"To get that breakaway goal was huge," Lowes added. "Cervone got a bounce over a stick and he had speed coming through the neutral zone and took advantage of it. We had a couple breakaways today and Bobby finally pulled through and finished it off."

After Miami freshman forward Colin Suter very nearly tied it back up by following his own blocked shot as he slid through the left crease, colliding with Byron in the cage, Liberty senior defenseman Paul White iced the victory with an empty-net goal from beyond the red line in the closing 20 seconds.

"A lot of hours go into meeting our goals, a lot of practice, workouts, film sessions, and it accumulates with games like this," Lowes said. "It's 60 minutes. Sometimes it comes down to a bounce or someone stepping up and doing something special. Tonight, everything went our way."

After the game, Lowes was congratulated by Liberty's DI Head Coach Kirk Handy, who was coach of the DII team the last time it made it to nationals eight years ago, when the Flames advanced to the championship game before falling to Oakland, 4-3 in overtime.

"We have a couple weeks to prepare," Lowes said. "We'll go up and be ready to battle and hopefully, we'll make some noise."

Nationals will be held March 21-25 near Boston, where the Flames will play three round-robin games in their four-team pool with a chance to advance to the quarterfinals.