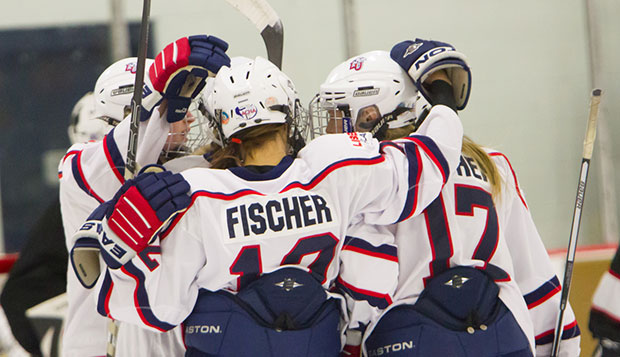 Liberty defensemen and cousins Madison (12) and Courtney Fischer (17) celebrate a goal in the Lady Flames' 9-0 victory over Northeastern, Saturday at the LaHaye Ice Center.

Three months to the day after allowing Northeastern to score two goals in the final minute of a 3-3 tie at Matthews Arena in downtown Boston, Liberty University's ACHA Division I women's hockey team won the first game of the rematch in a 9-0 massacre at the LaHaye Ice Center.

The No. 7 Lady Flames (11-8-4) swapped places with the No. 10 Huskies (11-8-1) in the third of four ACHA DI national rankings, released on Wednesday. Only the top eight teams qualify for the National Championships, March 13-16 in Newark, Del.

"This was huge this weekend," Liberty senior defenseman Courtney Fischer said. "We had prepared ourselves for it being a neck-and-neck game. In practices this week, we were ready to play and battle for our spot and we came out and got the win today."

Admittedly, Northeastern wasn't the same team as it was in early November, when it edged the Lady Flames, 3-2 in the second game in Boston. The Huskies only brought 13 players to Lynchburg and Liberty had a depth advantage on its opponent.

"They're playing with a really shallow bench so it just makes sense that we're going to wear them down and it was obvious by the third period they were getting tired and making mistakes," Liberty Head Coach Paul Bloomfield added. "We've been there and know exactly what it's like. It's hard to do because everybody's worn out."

Fischer, who sprained her ankle before Christmas, is one of a handful of Lady Flames who have returned from injuries in the second semester. Another is sophomore forward Catharine Burrell, who assisted Fischer's backhanded score from deep in the left crease, extending Liberty's lead to 7-0 in the third period.

"It's been huge having our whole team back tonight," Fischer said. "We're still missing one of our goalies (Sam Rupp), but we've been able to work on our systems and our regroups and our breakouts and our power plays and penalty kills."

The Lady Flames adjusted their game to capitalize on the Huskies' limited reserves.

"We changed our strategy a little bit because we knew they'd be wearing out," Bloomfield said. "We did a lot more dump-and-chase hockey. When you're fresh and they're tired, you can dump it in and beat them to the puck and then you can set it up. It worked pretty well."

Freshman forward Courtney Gilmour chased down a lead pass and converted her second goal of the game on a one-on-one breakaway, beating Huskies replacement goalie Kim Pfeifle with a quick move and shot into the upper right corner of the net to make it 8-0 midway through the third.

A minute and a half later, sophomore forward Carrie Jickling capped the scoring and completed her hat trick by putting away her one-on-one break with a chip shot top shelf.

Liberty outshot Northeastern 34-21 for the game and sophomore goalie Kristina Toppazzini recorded her third shutout and lowered her 1.25 goals-against average by making 21 saves. The Lady Flames extinguished a few Huskies power plays, including a five-on-three early in the second period.

"We've been working on penalty kill more and more throughout the year and I think our team does really well with that," Fischer said. "We have some girls that are willing to get behind the puck and do whatever it takes."

Liberty junior forward Sarah Stevenson started the second period with a goal on a shot from in the right circle to extend the lead to 3-0 before Burrell finished a two-on-one break and Jickling netted her first one-on-one wrist shot. Junior defenseman Madi Fischer, Courtney's younger cousin, then scored from near the blue line to stretch it to 6-0 with 27 seconds left in the stanza.

"The second and third period, the team played pretty well," Bloomfield said. "It's a good game to have under our belt. I think the girls are ready for (Sunday morning's rematch)."

The Lady Flames will look to complete the sweep, and strengthen their status before the fourth and final ACHA DI poll comes out later this month, when the puck drops at 9:45 a.m. at LaHaye.