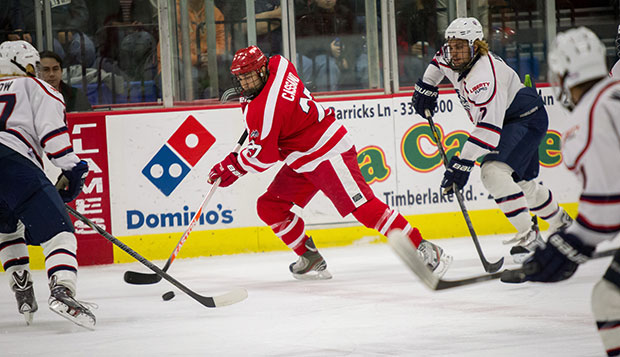 Playing its second game in five weeks in a span of 15 hours at Stony Brook, Liberty University's ACHA Division I men's hockey team recovered in time to salvage a split against the Seawolves with a 5-3 victory Sunday afternoon at The Rinx in Hauppauge, N.Y.

"Blair played really well tonight and gave us a chance to win," Liberty Head Coach Kirk Handy said. "Blair had a huge save with about five-minutes to go. It was a game-stopper."

A day after starting the new year with a 7-4 setback, the Flames (21-4) returned to form, getting goals from five different players to earn the 300th win of Handy's 14-year career.

"The key thing for us is contribution and guys understanding the situation we were in," Handy said. "We needed a win tonight and were able to get it, even though we had a shorter lineup tonight. The guys who did play all contributed, which was great to see."

As a testament to Liberty's extremely balanced attack, the Flames managed to come out on top without getting a goal from seven of their eight leading scorers on the season. Besides senior forward and captain Andrew McCombe, the team's third-leading scorer who put Liberty up 3-2 with a follow of his own shot midway through the second period, the Flames' scoring came from sophomore forward Danny Logan, freshman defenseman Chase Harris, sophomore forward Bram Erickson, and sophomore defenseman Brandon Cox, who recorded the game-winner six minutes into the third period.

"Logan, (junior forward) Ryan Kerr and Erickson was probably our best line tonight," Handy said. "They were able to establish our style of game. They played really, really well."

A day after multiple penalties and skirmishes on the ice led to a couple ejections and three power play goals for Stony Brook (15-4-3), both teams stayed under control and were called for just seven penalties on the afternoon.

"Our discipline was a lot better tonight," Handy said. "For the most part, we stayed out of the box and that was one of the things that made the difference. We only allowed one power play goal, which was key. Our penalty kill was strong. It played really, really well."

Though fatigue was a factor on both sides, the Flames, the No. 4 team in the latest ACHA DI national rankings, had the extra burst of energy in their legs and determination in their minds to avoid being swept by the No. 9 Seawolves, as they gear up for a trip to challenge No. 1 Arizona State on Thursday.

"We played a very solid game tonight," Handy said. "The guys were able to block (Saturday's loss) from their memory and come back. They rebounded and got back to our style of game. It was great, especially after falling down two goals early, to be able to battle back and get back in the game."