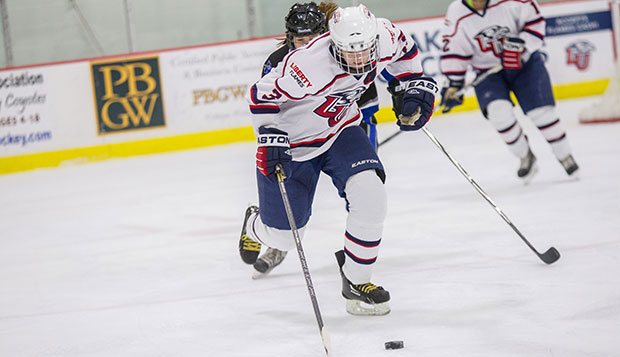 Carrie Jickling skates past a defender in a Nov. 16 matchup against the Reston Raiders at the LaHaye Ice Center.

Liberty University's ACHA Division I women's hockey team opened its 2014 schedule with an 11-0 rout of host Ohio State late Thursday night in the first of three games against different opponents on a road trip to Michigan.

The Lady Flames (8-6-4), ranked No. 10 in the second ACHA DI national poll, must travel five hours through possible snow on Friday to get to Grand Rapids, Mich., in time for a 3 p.m. contest at No. 13 Davenport University. They conclude their weekend journey at No. 6 Grand Valley State on Saturday at 5:30 p.m.

In the second period, Liberty added three more goals, the first by sophomore forward Sarah Fowler off assists from freshman forward Nicole Douglas and junior forward Stephanie St. Amand. Then, Stevenson scored twice in the final four minutes: the first assisted by Fischer and Jickling and second, with 29 seconds left, set up by Fischer.

Early in the third period, Douglas recorded the first goal of her Liberty career off an assist from Fowler. Then, with 12:05 remaining, Jickling extended the lead to 8-0 with an unassisted goal before Fischer and Graham made it 10-0 with back-to-back unassisted scores in a span of 20 seconds. Stevenson then capped the scoring, and completed her hat trick, off assists from Graham and Jickling.

Liberty was only called for one penalty in the contest, late in the first period, and sophomore goalie Kristina Toppazzini made two saves to preserve the shutout.

The Lady Flames defeated the Buckeyes (2-14) for the ninth time in as many meetings and first since 2010.

After returning to Lynchburg, Liberty concludes its regular season with seven straight games at the LaHaye Ice Center, the first two against No. 1-ranked Miami of Ohio on Jan. 23-24 followed by two against No. 7 Northeastern on Jan. 31 and Feb. 1 and two more against Davenport on Feb. 7-8.

Though senior defenseman Courtney Fischer is still sidelined with an ankle injury, Lady Flames Head Coach Paul Bloomfield is looking forward to having sophomore forward Catharine Burrell back on the ice in time for the series against Northeastern.

"It's really important that we do well in our next few games," Bloomfield said, noting only the top eight teams in the final rankings qualify for the ACHA DI National Tournament. "Our work's cut out for us."