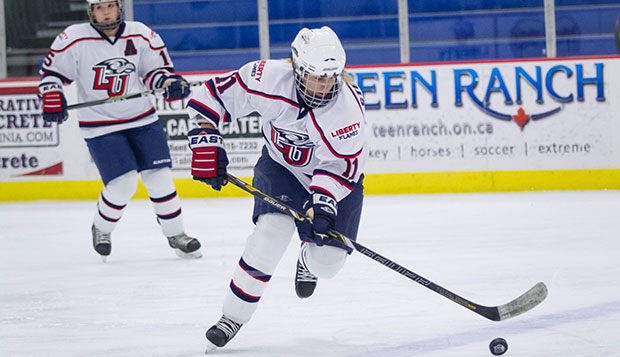 Liberty University ACHA Division I women's hockey junior forward Sarah Stevenson would love to have a chance to redo her last-second shot in Saturday afternoon's rematch at the University of Rhode Island.

Stevenson, who had a secondary assist on the Lady Flames' tying goal scored by junior defenseman Madison Fischer with 7:44 left in the third period, went on a breakaway in the final five seconds of overtime. She put an excellent fake on the Lady Rams' goalie, drawing her out of place only to clang the puck off the post.

"There was like 1.2 seconds left in the game," Liberty Head Coach Paul Bloomfield said. "She had all their defense beat big-time. They were 15 or more feet behind her. She actually had the goalie deked out of the net, totally out of position, but when she went to put it over the goalie, it hit the post and, of course, bounced out instead of in."

The Lady Rams (12-3-1) tied it with 5:53 left in the second period before getting the go-ahead goal 1:07 into the third. Stevenson and Jickling assisted Fischer on the equalizer, forcing the five-minute overtime.

"In overtime, the girls played really, really well," Bloomfield said. "It was a really close game and a good series. In the first and third periods, we did really well. We weren't really consistent in the second period and they capitalized on the moments when we were off."

Rhode Island outshot Liberty 16-9 in the second period, 9-3 in the third, and 31-27 for the game. The Lady Flames held a 12-6 shot advantage in the first period before out-shooting the Lady Rams 3-0 in the overtime.

"She was good in goal both games," Bloomfield said. "She played very well."

Liberty travels to Amherst, Mass., next for two games against fifth-ranked University of Massachusetts in the 9,500-seat Mullins Center.

"We'll have a good challenge with them on Monday and Tuesday night," Bloomfield said.