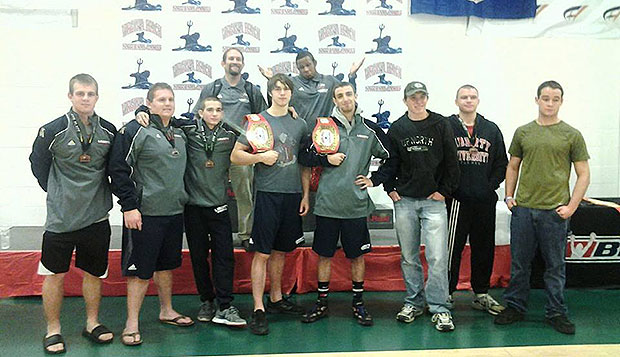 Members of the Flames who competed on Saturday included freshmen Ike Podell, a graduate of Liberty Christian Academy, and Josh Ferenczy, who won the 133 and 165-pound weight classes at the Virginia Beach Nationals.

"The guys that we took to the tournament were mostly backups, younger athletes newer to the program," said Liberty Assistant Coach Allen Hackmann. "The two champions we had should see significant time (in Liberty's varsity matches) this year."

Podell, a graduate of Liberty Christian Academy in Lynchburg, Va., did not give up a single point in the tournament, winning his matches 10-0, 12-0, by fall, and 5-0 in the final. Ferenczy, a state tournament qualifier in New York last year, prevailed in a weight class that featured 15 competitors, including several unattached to any school.

"He's been working hard in the room, but we've never seen him compete before, so we were pleasantly surprised at how well he did," Hackmann said of Ferenczy. "He was in a pretty tough weight class, that included three guys in our (Mid-Atlantic) Conference and one who was an All-American (at last year's National Collegiate Wrestling Association Championships). He dominated the kid that beat the All-American so it was a great tournament for him."

No team scores were kept, but other teams in the field included Apprentice School based in nearby Norfolk, which had the most competitors, Longwood University, the College of William & Mary, Penn State Greater Allegheny, Penn State Mont Alto, and Ferrum College.

"It was a good level of competition for an opening event, very comparable to what we will see at our conference meet," Hackmann said. "It was an open tournament, so there were a lot of military guys, wrestlers from the Navy, Air Force, guys who had already graduated. I was very happy to see the success we had with our newer athletes."

Out of the 11 athletes Liberty sent, eight placed in the top five.

The Flames also got a second-place showing from sophomore heavyweight Josh Travers, fourth-place performances from graduate student Collin Lewis at 141, freshman Christian Bock at 174, and senior Jacob Hood at 235, as well as fifth-place finishes from sophomore Cary Caprio at 125 and freshman Johnathan Meiusi at 157.

"Our training has been going very well and several of the close matches that we won were due to our conditioning," Hackmann said.

"Collin hasn't competed in over four years, but both of his losses were one-point losses," Hackmann said, adding he thinks the more experienced wrestlers, like Lewis, will mesh well with the new recruits. "I'm very much excited about our young guys because we've got several veterans who have placed at the (NCWA) National Championships and recruits complementing the guys that are returning."

This Saturday, a more experienced group of Liberty wrestlers, as well as a few freshmen who didn't go to Virginia Beach, will travel to near Philadelphia to compete in the Fall Brawl, hosted by Ursinus College in Collegeville, Pa.

"This was freshmen and newcomers on the mat and next week we'll bring more of our veterans, returning wrestlers for their first competitive matches of the season," Hackmann said.