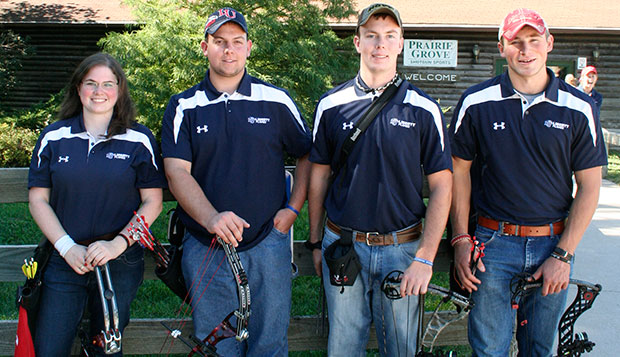 Members of Liberty's archery team that made the trip to Missouri, including Ian Rigley (second from left), pose at the site of last weekend's USIAC 3D Nationals.

After Saturday's first day of individual competition, Rigney, of Gretna, Va., was in second place out of 114 competitors, trailing only Missouri State's Jacob Spurgeon, 203-199. Rigney recoiled and fired a 206 in Sunday's second round, the best of the championships, to overtake Spurgeon (the runner-up with 396) for first place with a 405 total.

In the individual women's compound event, senior Marissa Scalzo placed eighth for the Lady Flames by following her 130 first-round score with a 168 in the second for a 298 two-day total.

For the weekend, Liberty placed fourth in the Men's Compound and fifth in the Mixed (male and female) Compound divisions in the team competition.

The 3D Nationals, a United States Collegiate Archery Association event started in 2009, drew a record turnout in all eight divisions, which ranged from men's and women's bowhunter to basic bow and recurve. Seventeen schools were represented and several of the matches were closely contested, with champions decided by a few points. View the complete results.