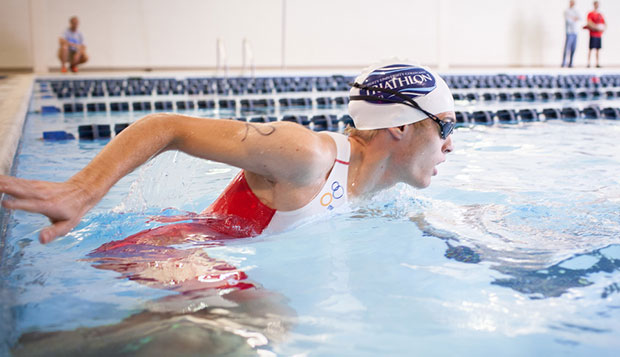 Joseph Anderson started second out of 93 triathletes in the LaHaye Student Union pool, based on his projected finish, and wound up winning his third consecutive event, Saturday on the campus of Liberty University.

When Liberty University junior triathlete Joseph Anderson witnessed a Naval Academy cyclist take a wrong turn soon after transitioning out of the pool during Saturday morning's inaugural Liberty University Collegiate Triathlon, he didn't hesitate to flag the Midshipman down and steer him back on course.

"He turned up the hill and I was right behind him because he was the No. 1 swimmer in the pool," Anderson said. "I yelled but he didn't hear me so I pushed really hard to catch up to him."

As co-race director with assistant director of Club Sports Dave Semenyna and head triathlon coach Beth Frackleton, Anderson felt compelled to help the wayward cyclist, even at the expense of his individual placement. Though he lost precious time on the detour, and fixing his chain after it fell off while making a U-turn to get back on track, Anderson was undeterred in the first sprint triathlon held on Liberty's campus.

"This was such a short course that every second counts, but they had come a long way," Anderson said of Navy, based in Annapolis, Md. "Since we are the race host, I wanted to make sure they had a good race, so they'd want to come back next year."

Anderson didn't use the delay as an excuse, but as additional motivation. Putting everything he had into the rest of the 11.5-mile cycling stage, he caught up with two of the four athletes who had passed him before pulling ahead of the others on the closing 3.2-mile run, winning the staggered race in 48 minutes, 45 seconds, 30 seconds ahead of North Carolina's Gil Cukierman.

It was the third consecutive triathlon triumph for Anderson, who turned professional in the sport this year and won the Luray Sprint and Patriots Sprint races over the past month.

A total of 93 triathletes from eight schools competed, including 22 from Liberty, 14 from Appalachian State, 13 from men's, women's, and overall team champion Navy, and 13 from JMU, led by overall women's winner Cynthia Carson (56:48).

After Anderson, who paced the Flames to a second-place men's team showing, and Cukierman, who helped the Tar Heels to a third-place finish, the Midshipmen swept the next 10 spots, led by David McFarlane (third in 49:18) and Christopher Brahm (fourth in 49:19), to dominate the men's race.

The event, run under overcast skies but without rainfall that could have made roads slick for cyclists, started with a 274-meter swim in the LaHaye Student Union pool. Swimmers used the transition area near the Green Hall bus stop to gear up for the three-lap cycling stage that ventured around campus before finishing with a 5.15-kilometer run that ended with a lap around the Matthes-Hopkins Track Complex.

"It was a really awesome race and a really good course," Cukierman said. "The bike stage was really awesome, a rolling course around campus. It was pretty tough overall, but it was up and down and fast."

The staggered start made it impossible for participants to tell what place they were in at any given point in the race.

"You could be fighting next to a runner that was four minutes behind you or ahead of you, so it's just a race against the clock for the entire time," said Robert Weisbach, Liberty's second finisher who was 15th overall in 53:03. "It becomes a mental race and how hard you want to push it."

"This is my first year on the team and my second triathlon," Brewer said. "I did a little better than the last one (the Sept. 8 Patriots Sprint near Williamsburg). It was really fun and a great race."

Navy's Luke Sullivan, who was sixth overall in 50:08, might have finished even faster if he hadn't made a wrong turn early in the run.

"Right out of the transition area, instead of turning left, I turned right," Sullivan said. "That was the only trouble I had on the course.

"Other than that, I liked it," he added, noting he especially enjoyed the cycling loop along Regents Parkway and University Boulevard. "There was a lot of room to maneuver and it was challenging. It wasn't flat. It definitely made you drop gears and shift up gears."

Liberty's 10 men and 12 women triathletes were thrilled to stage the race on campus.

"It was super exciting to be able to do it on our home turf," said Jakob Ingersoll, who came in 32nd in 1:00:47. "We knew where the hills are and when to decrease and when to increase our gears so we had the home-course advantage. There's definitely room for improvement, but it was our first one and it was awesome."

"Joey did a fantastic job," added Alex Motley, Liberty's fourth finisher who was 22nd overall in 55:37. "He and Beth both put a lot of work into it."

Frackleton said it was a great learning experience for everyone involved, with tremendous support from Liberty's Club Sports staff as well as the Liberty University Police Department, the Iron Gate Triathlon Club, and Riverside Runners, which provided the timing system.

"There were two little glitches, but for our first event, it was fun and no one got seriously hurt," Frackleton said. "That was the first thing and, secondly, I wanted it to be fair, with it being a USAT-sanctioned event.

The race was excellent preparation for the Oct. 6 Mid-Atlantic Triathlon Club Championships, which will be held on an OIympic-length course in Columbia, Md., more than twice the length of Saturday's event with a 1,500-meter swim, 40K cycling stage, and 10K run.