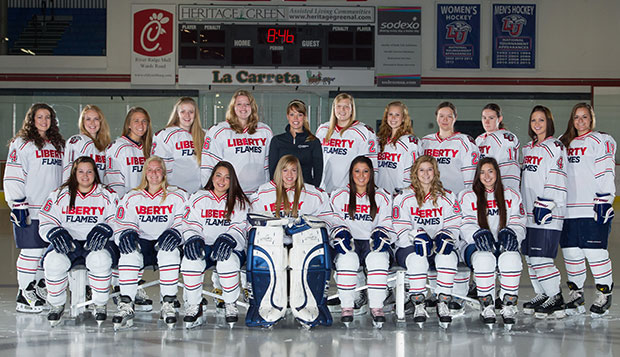 The Lady Flames feature a deeper bench and more potent attack this season, as they hope to showcase this weekend in their season openers at the LaHaye Ice Center.

She kept the Lady Flames in a few contests, ranking second in the league and sixth in the nation with a .911 save percentage. But opponents in the American Collegiate Hockey Association netted 5.77 goals per game against her and Liberty finished 0-12 after being outscored by a 10-1 margin (70-7).

Both Niemi sisters are back this fall — Sara for a second season at the helm and Leanne for her fourth year in the cage — and the Lady Flames have the depth needed to light up the scoreboard more regularly this season.

"This year, we will be focusing on our offensive systems," Sara Niemi said. "Last year we struggled to score, but this year with our increase in players, speed, and intensity, we will be able to develop some strategies to get some pucks in the net and to relieve pressure off our goalie (Leanne)."

Liberty does face a challenging schedule, following its openers this weekend against a U16 team from North Carolina, set for 9:15 p.m. Saturday and 9:30 a.m. Sunday at the LaHaye Ice Center.

"This weekend, we're looking to help develop our strength of lines, offensive play, and defensive positioning," Sara Niemi said. "I am hoping to walk away from this weekend with two wins, but most importantly get some game experience for our new players this year."

She said the team has a fresh outlook on the season and is eager to hit the ice and take opponents by surprise.

"We are all looking forward to this year as I know we are a lot more skilled, stronger, and more confident than last year," Sara Niemi said. "We have several players returning this season which will give us an edge because they will have the experience when we play tough teams. We also have a deeper bench this year. With 17 skaters, we have more players to develop and place into positions that fit their playing style."

Defenders Rena Leone, Liz Leach, and Tea Gaudet de Lestard will provide leadership on and off the ice along with Leanne Niemi, the Lady Flames' top goalie for the past three years.

"She will once again be a huge asset to our team as we face teams such as Penn State and Slippery Rock," Sara Niemi said.

Margaret Poit is a returning forward with experience and will be complemented by several newcomers on attack, including Olivia Marshall, Meghan Nawyn, Nicole Stevens, Alena Steiger, and Haley Hyland.

"They will help our team offensively this year with their speed and intensity," Sara Niemi said.