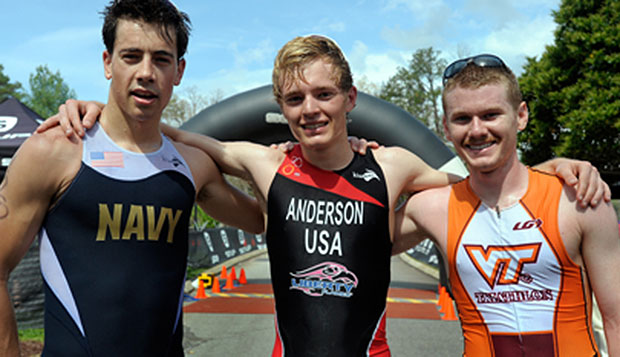 Liberty junior Joseph Anderson (center) poses with triathletes from the Naval Academy and Virginia Tech at a recent event.

Liberty University junior Joseph Anderson, who became a professional triathlete this year and trained in Kampala, Uganda, over the summer, finished first out of more than 500 competitors at Sunday's Patriots Sprint near Williamsburg, Va.

"He was first out of 298 men, who were mainly age-groupers and he's gone pro now," Liberty triathlon head coach Beth Frackleton said.

Anderson's transition time between the swim and cycling stages took 2:02 and his transition between the bike and run required just 34 seconds. His closest competitor was Jack Smith, 27, from Kutztown, Pa., who crossed the finish line in 59:40.

Anderson won his previous race, the Aug. 18 Luray Sprint, a Virginia Triathlon Series event, by more than five minutes in 1:17:42.

Saturday's Patriots Sprint, which started and ended at Anniversary Park near the site of America's first settlement in Jamestown in 1607, was an open race, unlike the upcoming Liberty University Collegiate Triathlon on campus on Sept. 21. But it did attract many collegiate athletes, including 18 from Liberty and several more from the Naval Academy in Annapolis, Md. It was considered part of the Mid-Atlantic Collegiate Triathlon Conference series that includes schools from Delaware, Maryland, New Jersey, North Carolina, Virginia, Washington, D.C., and West Virginia.