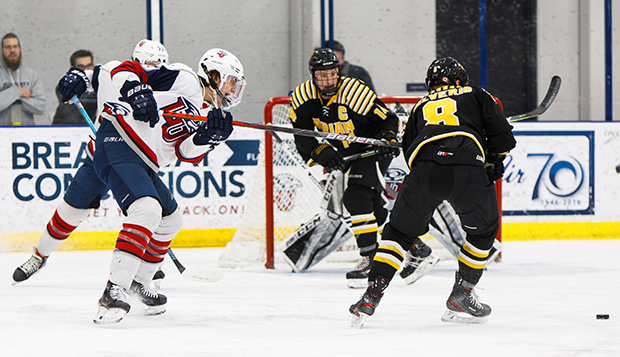 Scrappiness and speed were on display from both sides throughout Friday afternoon's ACHA Division I men's hockey rematch between Adrian College and Liberty University. But the Flames came up on the short end of the stick in the showdown between the No. 1 and No. 2 teams in the nation last season, suffering a 7-0 setback at the Arrington Ice Arena.

"We battled, we competed, we played the game the right way and stuck to our systems," said Adrian Head Coach Gary Astalos, who saw the Flames end the Bulldogs' undefeated season and their unblemished record against Liberty in a Feb. 21-22 sweep at the LaHaye Ice Center. "They're a top-five team in the country. It's been a great rivalry with these guys. We always enjoy playing them. We play hard on the ice but we definitely respect the heck out of each other off the ice."

Adrian, which outshot Liberty, 33-22, scored once in the first period before adding three goals in the second and third each to seize control.

"They made the most of their opportunities," Flames Head Coach Kirk Handy said. "We had chances and weren't able to capitalize. We didn't have our game where we needed it to be today, that's for certain. We obviously have some things to work on, which is why we play these games now. We believe in our team, and we know this is an opportunity to get better. Everyone today, coaches and players, need to be better and we will be better."

The Bulldogs struck first with 14:10 left in the first period when junior forward Brenden Stanko stole the puck in the high slot, skated into the left circle, and faked a shot before finding senior forward Mike Finger open in the right crease-for a one-timed finish past Flames sophomore goalie Cédric LeSieur.

Just 30 seconds after the second-period faceoff, with Adrian swarming in the Flames' defensive zone, sophomore forward Sam Spaedt sent a backhanded pass from beyond the right endline to graduate forward Domenic Moore skating through the right crease. He beat LeSieur five-hole from point-blank range, doubling the edge to 2-0.

Liberty had an excellent shot to draw back within one goal while on a power play at the 13:45 mark when sophomore defenseman Colin Baird received the puck back off a faceoff won by the Flames and launched a shot through traffic that bounced right to sophomore forward Brett Gammer. However, Adrian graduate goalie Michael Barrett made a diving save to smother Gammer's backhanded putback and preserve the 2-0 advantage.

Then, with 10:25 left in the period, Bulldogs sophomore defenseman Sheldon Nolan released a long outlet pass from deep in his own zone onto the tape of the stick of sophomore forward Connor Smith, accelerating up the right wing. With wide open ice to work with, Smith skated in on LeSieur for another five-hole finish and 3-0 Adrian lead.

Spaedt capitalized on another breakaway opportunity after making a steal near the red line skating in to finish inside the left post, over LeSieur's right pad and under his blocker, to make it 4-0 with 4:52 to play in the period.

With 13:24 left in the third, Smith extended the Bulldogs' lead to 5-0 by converting on a 3-on-2 odd-man rush, receiving assists from Nolan and Stanko and beating LeSieur glove-side.

With 20 seconds to go on a power play, junior forward Manny Silverio sent Moore a pass from the left backboards for a quick one-timed finish near the left post and a 6-0 advantage.

Finally, off an offensive faceoff, Stanko iced the Bulldogs' victory with a putback in the left crease of Nolan's shot from the top of the left circle.

After a heated, often chippy contest, the teams showed sportsmanship with several members of the Bulldogs joining the Flames at center ice for prayer.

Liberty will have two months to regroup and refine its game before opening spring semester action with an ESCHL series Jan. 15-16 against Delaware at the LaHaye Ice Center.