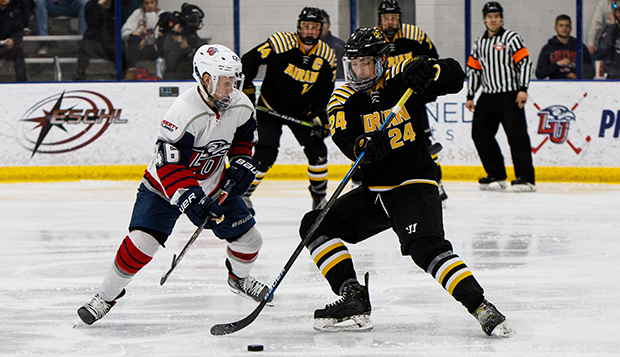 Two weeks before Thanksgiving, Liberty University's and Adrian College's ACHA Division I men's hockey teams left nothing on the table and pulled no punches in a playoff-intensity showdown between the top two programs in the nation last season, won by the Bulldogs, 5-2, on Thursday night at the Arrington Ice Arena in Adrian, Mich.

"It was a back-and-forth game and as the game went on, our guys and our team got stronger and stronger," Flames Head Coach Kirk Handy said. "In the first period, we were trying to feel each other out, but in the second and third periods, the action was in our favor. We battled back and I liked our compete right to the whistle at the end there."

Liberty (1-1) outshot Adrian (3-0) by a 45-27 margin, but finished 0-for-3 on the power play while allowing the Bulldogs to put away three of their five power-play chances for the contest.

After going 0-for-2 with a man advantage in a scoreless first period, when both teams took eight shots on goal, Adrian capitalized 15, 20, and 35 seconds into their third, fourth, and fifth power-play chances, respectively, in the second.

Junior forward Tyler Fyfe rung up the first goal with 14:50 left in the period, receiving a cross-ice feed from senior forward Chris Donaldson and slapping a shot from the top of the left circle past Flames sophomore goalie Hunter Virostek.

On the second five-on-four opportunity of the period, Bulldogs sophomore defenseman Sheldon Nolan started a fast break up to Fyfe, who fed freshman forward Matteo DiGiulio who launched a shot through the slot that slammed through the five hole for a 2-0 Adrian advantage at the 10:31 mark.

Finally, with 7:51 to go in the period, junior forward Brenden Stanko skated the puck left to right behind the cage and sent a perfect pass into DiGiulio for a one-timed finish deep in the slot and a 3-0 Adrian edge.

"They were able to score three on the p0ower play, and that's the difference," Handy said. "We need to stay out of the box (in Friday's rematch). We can't give them five opportunities on the power play. I believe in our PK (penalty kill), but there were a couple goals that went in on them and that's going to happen."

Flames graduate forward and head captain Brock Thompson cut the deficit to 3-1 with 2:36 left in the second period by skating the puck from the outside edge of the right circle and around the right corner before cutting back from the endline through the right crease and lifting a wrist shot from out in front over the glove of Adrian graduate goalie Michael Barrett.

With Liberty on the power play, Barrett kept the Flames from cutting it to 3-2 less than a minute before the second intermission by making a spectacular point-blank save of a shot from the left crease.

But less than a minute into the third, the Flames did make it a 3-2 contest when graduate forward Quinn Ryan controlled the puck along on the backboards and sent a backhanded assist to junior forward Josh Fricks, who punched it in from the right crease at the 19:05 mark.

However, two and a half minutes later, Adrian regained its two-goal lead when Fyfe skated the puck down the left wing and through the left crease before sending a crossing feed to senior defenseman Dan Stone who knocked it past Virostek in traffic for a 4-2 advantage.

With the teams playing 4-on-4 for two minutes late in regulation, senior forward Cole Gammer nearly made it a one-goal game again by taking a long outlet pass from senior defenseman Garrett Nelson for a breakaway with Barrett, who blocked his five-hole shot attempt after not falling for his fake.

The Flames pulled Virostek for the final minute and generated a few quality chances, but could not convert and the Bulldogs added an empty-netter a split second before the buzzer.

"We'll regroup," Handy said. "I love what we have in that locker room and as a coaching staff, we believe in those guys in there. We're not hanging our heads. We are excited to go back at it again (on Friday)."

The puck drops for Friday's rematch at 3 p.m. and will again be webcast live on Adrian's YouTube channel. 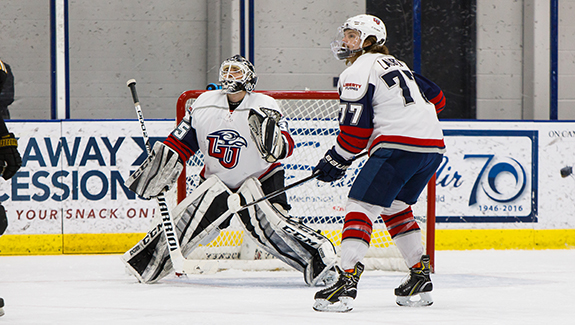