DII Lady Flames bracing for the Hurricanes, Friday at the LIC 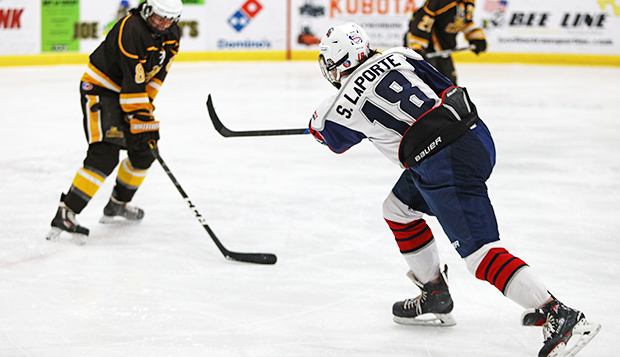 Senior defenseman Sarah LaPorte launches a shot from the perimeter in a game last season at the LaHaye Ice Center.

Liberty University's ACHA Division II women's hockey team will get its first and only test of the fall semester this Friday at 7 p.m. at the LaHaye Ice Center, where the Lady Flames will host the Carolina Junior Hurricanes' women's hockey team.

The Lady Flames are one of the few programs in the country with an on-campus arena, which could give them an advantage over the competition when ACHA play begins in early 2021.

"It's nice to be able to have our girls in the rink Monday, Wednesday, and Friday, doing our normal thing, being able to have team activities on the weekend and still enjoying our time together but also getting to relax this semester," Liberty third-year Head Coach Rena Leone said, noting that her players have had ample opportunity to focus on academics and strengthen team bonds this fall. "It's definitely odd to not be traveling a lot or be super busy, but I think the girls are enjoying the down time and they know come January and February, we're going to get back to the grind and work toward making nationals again."

After winning their first 11 games last season, including a 5-4 victory over the Hurricanes on Oct. 26, the Lady Flames (16-5) won four of their next six before losing three of their final four, capped by a 4-3 triple overtime loss to Mercyhurst in the CHE Tournament final.

Leone has trained her players to be ready for an action-packed spring semester, when they will contend to qualify for a second consecutive ACHA DII National Championship bid.

"This semester has been about skill work, so we haven't really been focusing on the conditioning side of it or even just the systems side of it just because … we don't want the girls to start learning something and then forget it over the (Christmas) break," she said. "Once January comes, they know we're going to be hitting the ice hard, doing a lot of conditioning, but a lot of system work, especially, to figure out our lines and how everybody plays with each other and also to figure out our power play and penalty kill."

She said it is helpful to keep long-range goals in focus through a fall semester that has been short on competition.

"The girls definitely know that nationals is a priority, but at the same time, they want to focus on building the team, building the dynamic, being good teammates to each other, and also learning how to play with each other on the ice," Leone said. "We've had a little bit of a team dynamic change … but once we start playing games, that will come faster, so we just need to figure out how to get back to normal."

"We definitely have a different team this year," senior defenseman Sarah LaPorte added. "We had a good amount of people graduate or just not come back, so it's nice to take this fall and kind of develop and just be able to work together as a team toward that goal (of making the ACHA DII National Championships.)"

Sophomore forward Morgan Whitehorne said the players have maintained accountability in sharpening each other's skills and improving fitness levels on and off the ice.

"We're trying to get our conditioning up in the fall, so that way we'll be ready to go in the spring when it's going to be really hard since we've got a number of games in a short period of time," she said.

"It is going to be important that we are working just as hard as we would if there was a season in the fall," LaPorte added.