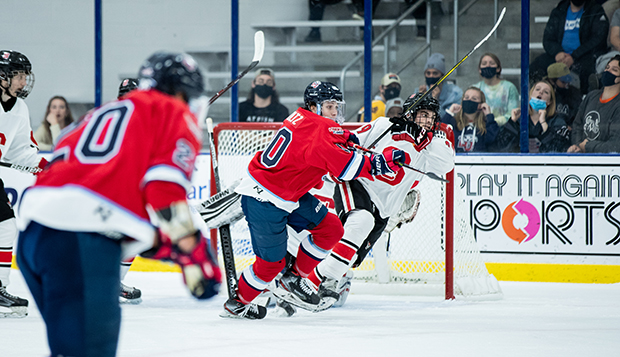 A five-goal second period lifted Liberty University's ACHA Division I men's hockey team to a 7-2 triumph over North Carolina State on Friday night, the long-awaited season opener played in front of an enthusiastic crowd at the LaHaye Ice Center.

"We are super blessed to be able to play with some fans and actually play some games," said Kris Bladen, a freshman forward from Edmonton who added a goal and an assist. "I know back in Canada they canceled their university season (due to COVID-19)."

After a scoreless first stanza with back-and-forth action, Liberty capitalized twice in a span of 31 seconds at the start of the second before extending its lead to 3-0 four minutes later and 5-0 by the end of the period.

"It was good to start off fast in the second after we got the rust off in the first," Bladen said. "We had kind of a slow start, but NC State had a lot of jump to their game in the first period and the second period we went out and showed them who we are."

Flames forward and head captain Brock Thompson, who missed the last half of last season due to injury, broke the scoring ice just 42 seconds after the second-period faceoff. After receiving a pass from freshman forward Jason Foltz on a breakout, Thompson launched a wrist shot from the top of the left circle that beat Icepack goalie Joshua Cannon top shelf.

Gammer netted the next two goals for the Flames, with graduate defenseman Chaydan Lauber helping to set up both. On the first, junior forward Josh Fricks received a pass from Lauber and skated the puck behind the left side of the cage before stopping, pivoting, and backhanding a backdoor pass to Gammer in the left crease. He one-timed a quick shot past Cannon, who had turned the other way, for a 2-0 advantage at the 18:47 mark.

With 14:41 left in the second, Ryan skated the puck out of the defensive zone with speed, giving the Flames numbers on the Icepack. He sent a pass to Lauber, who skated into the left circle before dropping the puck back to Gammer who rifled a shot pass Cannon for a 3-0 advantage.

Two goals in 12 seconds ended the night in net for Cannon, with Bladen assisting the first and converting the second to match his point production from the Oct. 9 Blue & White intrasquad scrimmage.

Bladen won a right-circle faceoff back to senior defenseman Alex Norwinski, who buried a shot through traffic from the high slot to stretch Liberty's lead to 4-0 at the 7:53 mark. Then, after winning the ensuing faceoff back to Norwinski, Bladen controlled a long outlet pass along the left boards from freshman defenseman Tristan Slot before slashing through the left circle and lifting a beautiful shot into the top right corner for a commanding 5-0 score.

"It was a good sequence there," Bladen said. "(Slot) put the puck up quick and I just chased the puck and took it off the defender's stick and put the puck in the net. It was nice to get that goal for the boys."

He and his freshmen linemates DJ Schwenke and Foltz have formed a potent third line for the Flames, following the lead of Liberty's veteran captains.

"We practice every day together, so I think we all have chemistry and we're all good friends off the ice," Bladen said. "(The captains are) all good guys and they're all older so they're good to learn from because they've been here for a while. As freshmen, we look up to those guys for sure in the dressing room. They're always helping us … telling us if we're not doing something the way they want us to do it. They all lead by example. You can't say enough good things about them."

With 19 seconds remaining on a power play that carried over from the second period, Gammer completed his hat trick with 18:47 to go in the third. He followed Ryan's sharp-angled shot from the left boards by digging the putback past NC State goalie Eric Daniel from deep in the left crease, padding the lead to 6-0.

The Icepack ended Flames junior goalie Tyler Myers' shutout bid with 10:54 to play when Colby Pederson took advantage of a turnover with a quick finish in the right crease.

But Ryan responded off an assist from sophomore defenseman Tom Nagle, skating around the left corner before lifting a wrist shot off the post and the back of Daniel into the back of the net, stretching Liberty's edge to 7-1 with 8:18 to play.

Six minutes later, Chris Solomon picked up the puck from Riley Johnson, who was checked in the high slot, and skated through the open lane before beating Myers top shelf for the final score.

Liberty outshot the Icepack 39-22 with Myers making 20 saves in the complete game between the pipes.

The Flames have less than three weeks to prepare for a rematch of last season's rivalry with No. 1-ranked Adrian College on Nov. 12 in Michigan before concluding fall semester play against Indiana Tech on Nov. 13.

"That will be a good road trip and a good second game against (Adrian)," Bladen said. "We're excited for it, we're ready for it. We're pretty confident. We need to keep bearing down in practice, finding that chemistry, and playing as a whole team, working as a unit."

Forward Cole Gammer (90), who had a hat trick, shoots in front of Flames defenseman Colin Baird.