Archers strike bronze at USA Archery 3D Nationals in Ala. 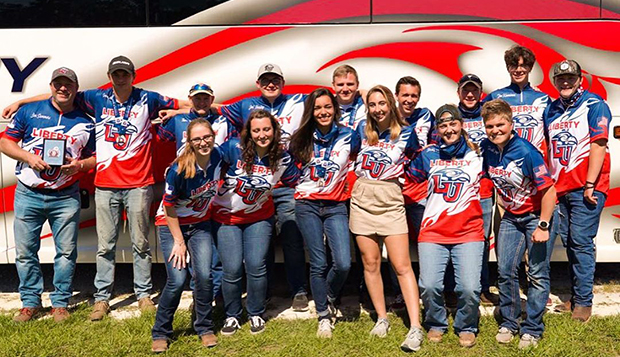 The Flames and Lady Flames traveled with 14 archers for the two-day USA Archery 3D competition in Foley, Ala.

Liberty carried a team of 14 men's and women's archers with at least one represented in every division in the competition. The Flames and Lady Flames were led by junior Connor Rothermel, who placed third in the men's Olympic recurve event, and the mixed barebow team of juniors Hannah Suber and Isaac Underhill, who finished third as a tandem.

"The competition was extremely strong with two professionals in the field," Flames Head Coach Ben Summers said. "For a lot of our archers, it was their first 3D tournament ever. They were shooting against schools from as far away as Oklahoma and South Dakota, including many who brought 30-40 students, many on scholarships."

After Friday's first round of 20 targets, Rothermel, last year's men's Olympic Recurve Archer of the Year, was in second place with 195 points, 10 points out of the lead.

"Connor was second until last target (on Saturday), when he shot a five (out of a possible 10) to finish third in an extremely tight field," Summers said.

Suber tied for sixth in the women's barebow event with a score of 121 while Underhill was seventh with a 153, individually.

Senior Danielle Bergen placed 10th in the women's elite bowhunting division with a round of 190.

Shooting at targets placed at a distance of 45 yards, sophomore Emma Suggs placed 16th in the women's compound division with a score of 197, followed by freshman Nichole Dieterly (21st with 183).

"It was a long, really flat course, which was not common to us as we have a lot of hills on our course," Summers said. "They were all marked distances, but the (length of the shots) made it very challenging. I was happy with all of them."

After the event, the team spent time at the beach, a highlight of their 12-hour trip.

"To be able to be together as a team, it was such a blessing to be part of something bigger than yourself," Summers said. "Most of the team members really understand and appreciate the university for allowing us to travel the way we did."

He sets realistic targets for his archers, with holistic development in mind.

"I know we're going to be up against teams that a really, really good, but my goal as a coach is to produce leaders who are going to be able to shoot archery for the rest of their lives," Summers said, noting that he is training them all to become USA Archery Level-II instructors so they can start their own clubs wherever they go after graduation. "I want them to know that the university really cares about them and wants them to be good people in the end."