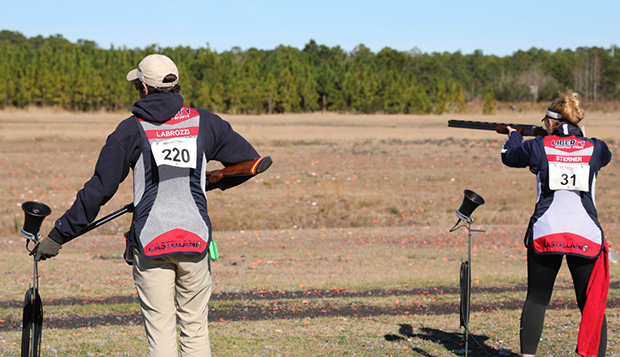 The Flames and Lady Flames graduated only two seniors from last year's team and have supplemented their ranks with one new recruit, Nathan Brandmeyer from Iowa, and four walk-ons who earned their spots through an extremely competitive two-week tryout period.

"We have added a great number of skilled shooters," Liberty Head Coach Roger Johnson said of freshmen Ethan Goodman and Gavin Bowman and sophomores William Stewart and Jacob Johnson, his son who competed on the Flames' snowboard team last year.

Jacob will join junior brother Justin Johnson, who he grew up shooting with in the 4H club in Richmond, Va. At Monday's team practices, Justin Johnson and senior Jacob Davis were designated team captains along with junior Elijah Labrozzi.

The Flames and Lady Flames are fixing their sights on challenging for the ACUI National Championships, set for March 22-28 in San Antonio, Texas, after having their shot at a Division III national title denied when COVID-19 canceled that event last spring.

As a first tune-up this fall, Liberty will send its entire team to nearby Gretna, Va., to compete individually in the Virginia Sporting Clay Championships, set for Oct. 17-18 at Brushy Mountain Gun Club.

"We expect to see some individual representation from as many as a half dozen local universities in the collegiate category," Johnson said.

He is also working on hosting a scrimmage with shooters from VMI, Virginia Tech, and JMU, if it reopens from COVID-19, at LMGC's range in November and another in March after competing in the ACUI Lower East Coast Championships in Savannah, Ga., a February qualifier for nationals.

"The year is still early, but we possess the talent and have the time to refine our capabilities to be a national contender again, as we would have been last year," Johnson said.

After placing second as a team at last year's Upper East Regional Collegiate Clay Championships in Maryland, the Flames and Lady Flames were the only Division III team to finish in the top 10 at the ACUI Lower East Coast Championships.

Liberty will carry all 15 team members to all but the national championships, when it will send only 10 to maintain its Division III status.