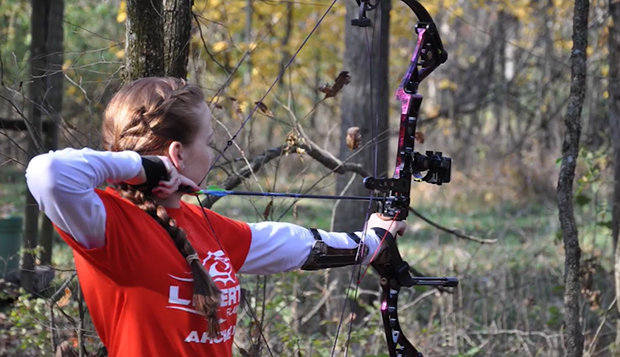 Danielle (Thompson) Smithgall ('13) won many archery competitions growing up competing around Richmond, where her father worked at an archery shop.

But there were none more memorable than the U.S. Collegiate Archery Association's 3D National Championships in October 2011 in Ohio.

She became the first women's national champion on any Club Sports team that year, winning the women's bowhunter division

"I actually tore my back muscle two or three weeks beforehand and I couldn't move at all, so I was super worried that I wouldn't even be able to shoot," said Smithgall, who married her husband, Michael, last June. "The fact that I could make it to the shoot and that I actually won that, that's my pride and joy right there. It was surreal."

She was sharpened by teammates Alex Blake, a compound archer, and Joshua McKinney, a bowhunter, who claimed the first of many men's titles in their respective events that same year.

"The guys that took me under their wing," Smithgall said. "I was like one of them."

Brandon Reyes, a professional archer who works with current archery Head Coach Ben Summers at T.R.U. Ball Archery in nearby Madison Heights, Va., coached the team for three seasons during its early years. He said Smithgall showed tremendous determination and focus through her injury.

"It was difficult for her because that was before the day (Club Sports student-athletes) were able to get a lot of physical therapy through the (Athletic Training department)," Reyes said. "She wanted to compete really bad and did everything she could to let it happen. She was definitely committed to the team and that showed in her willingness to get out there and perform."

He was impressed with her steel-like nerves and concentration during competitions.

"She was always able to focus on whatever she set her mind to," Reyes said. "She hardly ever showed any type of emotion that would rattle her. She was always real calm, cool, and collected. She was serious about archery and wasn't going to do it unless she had time to practice and she was committed to it."

Smithgall learned that resilience and sense of dedication to and passion for the sport by growing up in a family of bowhunters, who weathered the elements together outdoors during hunting seasons.

"I've shot bow since I was 5 years old and my whole family is into it," Smithgall said. "My mom and dad shot all of the time, we bowhunt all of the time, so it was just like a family thing and I enjoy loving and doing it. We love 3D shoots most of all rather than (indoor) paper shoots."

After earning her B.S. in Athletic Training at Liberty, Smithgall worked in physical therapy for a while and now serves as a medical assistant at the Women's Cancer and Wellness Institute near Richmond.

She is proud to have played a part in establishing a winning tradition for the program and leaving a legacy for others to build on.

"It feels amazing, honestly," Smithgall said. "Liberty helped me in so many ways with my gratitude for everything and just being there for people who need help. When I first started, there weren't many people who enjoyed doing it. The fact that it grew as the years went on, it's amazing to see all of these people who actually love it now."

Reyes said the fledgling team quickly established a culture on campus that has continued to flourish.

"Everybody was new back in that time, and everybody learned from everybody, those who were part of the club team," he said. "They were friends, all of them, and when they traveled to the events, they enjoyed being around each other."

Smithgall continued building on her skills in the sport and has even served as an instructor to area youth.

"I stopped teaching maybe five years ago, but that was the best part of teaching all of these young children how to shoot a bow and arrow at summer camps," she said, noting that she also gave individual lessons to family friends in her back yard. "I just loved teaching them to be able to do that and I feel like I made it easier for them rather than complicated."