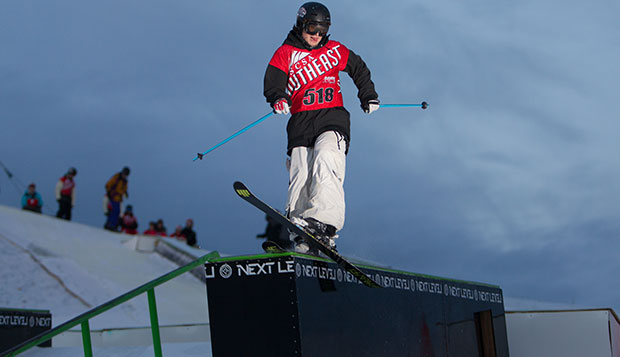 Flames junior Tim Steltzer competes at the Liberty Mountain Snowflex Center at a Feb. 2 competition. He won Thursday's Big Air event before a crowd of close to 500 before placing 12th individually in Friday's men's slopestyle at Sun Valley, Idaho.

Traveling to Sun Valley, Idaho, for this week's United States Collegiate Ski and Snowboard Association national championships was the highlight of the year for Liberty University head coach Will Scheren and the six members of his team that competed Thursday and Friday. The Flames got some serious air time, as well as significant media exposure, with their four men's snowboarders finishing fourth as a team in Friday's slopestyle competition, a day after Eden Jones placed fourth individually in the women's event.

"Being out here has accelerated our program far and away more than anything else we've done this year," Scheren said. "We were hitting jumps that were 50-foot gaps, 68-feet jumps, the biggest jumps you're able to hit anywhere unless you're riding in the Winter X-Games. As riders, these guys were able to hit jumps much bigger than they ever have before and they're coming back with a ton of confidence."

He said the Flames made a name for themselves in Sun Valley, even if Friday's finals didn't turn out quite the way they had hoped. Junior Tim Steltzer placed 12th out of 40 skiers in the men's individual slopestyle event after winning Thursday night's Big Air competition, an exhibition similar to an X-Games showcase. The men's snowboard team took fourth in the slopestyle team standings behind only Sierra-Nevada, the University of Colorado-Boulder, and Western Colorado State University.

"Liberty University has become a well-respected snowboard program," Scheren said. "Other coaches are interested in Snowflex and we've been told by most universities that we are a force to be reckoned with. We should be able to win a national title in slopestyle in the next three to five years and I don't think there's any question about that after the way our guys were riding and hitting their jumps this week."

Two of the Flames' four men's snowboarders reached the slopestyle finals, with seniors Kevin Hoff finishing eighth and Dave Promnitz placing 16th out of 60 riders. Promnitz took 10th at last year's nationals in Maine, where Liberty came in seventh as a team.

"That was very respectable," Scheren said. "Kevin had a really clean first run. He went backside 360-(degree spin) over the first jump into a giant method air on the second. He went like 80 feet so that was huge. After that, he did a front lip 270 out on the first rail and the last rail was a 50-50 front-side 180 out."

As tricky as that may sound, Scheren said that was "actually a pretty conservative run for him. It was a smart run. That was the run we put together at the start of the year to make sure that he made finals at nationals. By our count, he was in fifth place after the first run."

For the second run, Hoff tried to repeat his first, with the exception of doing a 720 instead of a 360 on the first jump. He managed to land it, but put his hand down and had significant drag coming out of it, slowing him down for the rest of the way.

As his younger brother, Jonathan, did last year, Steltzer stole the show and soared through the sky on Thursday, only to come back down to earth a bit on Friday.

"Big Air is an exhibition event that the USCSA puts on," Scheren said. "It's almost like the Academy Awards or something. Liberty got quite a bit of recognition that night. There were about 400 or 500 people watching it. It was not a national championship event, but only eight out of the 100 skiers and snowboarders got a chance to compete, so it was quite an honor.

"Tim won it, beating the champion and the second-place finisher for slopestyle," he added, noting Steltzer's winning run combined a switch 900 with a rodeo 900. "That's a very elite trick."

In Friday's ski slopestyle competition, Steltzer fell on the first jump on both of his runs.

"He had a bit of a rough day," Scheren said, noting there were numerous falls on Friday. "On his first run, he hit a bit of a weird lip off the jump and on the second run, he was just going over the jump and his ski popped off. It's a bummer things didn't go his way today, but he doesn't have anything to hang his head about. He rode great all week and he has the respect of some of the best riders in the country. They were afraid of him."

Steltzer recovered well on both of his runs, which consisted of two jumps and two rails.

"Tim's a great rail rider and he made up for it on the rails both times," Scheren said.

Scheren is excited about the opportunity to take what he learned at Sun Valley and apply it to his coaching at Snowflex, with a series of four Collegiate Freestyle Association events coming up in the next two months.

"Being here gave me the ability to coach these guys and to give these riders more confidence," Scheren said. "We now have all the tools needed to win a national championship, except for an air bag (which cushions the falls on big aerial stunts). I would love to get an air bag. We're knocking at the door to be a powerhouse in slopestyle. I'm looking forward to going out and getting back to work, training for slopestyle and increasing the difficulty of the tricks we're doing."