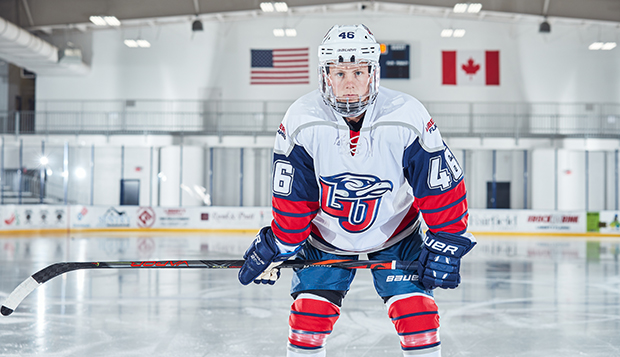 Fifth-year defenseman Garrett Nelson and the Flames will look to defend their ESCHL regular-season title this spring to qualify for ACHA DI Nationals in April. (Photos by Ross Kohl)

A seven-month intermission from competitive action has Liberty University's ACHA Division I men's hockey team eager to return to the ice, even for an abbreviated schedule released this week.

The Flames, who ended last season ranked a program-best No. 2 in the ACHA before being denied an opportunity to contend for their first national championship in Texas due to COVID-19, began their first week of practice on Monday. Following a "Blue and White" intra-squad game open to the public with tickets on Oct. 9 at 7 p.m. at the LaHaye Ice Center, they will open their 2020-21 season by hosting North Carolina State on Oct. 23 at 7 p.m.

"The guys are anxious to compete, just excited to get going," Liberty 20th-year Head Coach Kirk Handy said. "It has been a long time since we have played, and the guys are focused on what we are going to have to do to be successful at the end of the year. We have a focus with the end in mind, so we'll be at our best when it matters most."

Fans who reserved season tickets over the summer receive first priority on limited seating for the Oct. 23 opener before they are made available to non-season ticket holders on Sept. 21 through the Flames' ticket website. A total of 760 tickets will be distributed, not counting the 10 suites which have sold out for the season. The contest will be streamed live by the Liberty Flames Sports Network (LFSN) on ESPN+.

On Nov. 12, the Flames will travel to Adrian for a rematch with the No. 1-ranked Bulldogs, who they swept at home on Feb. 21-22, before concluding fall semester play Nov. 13 at Indiana Tech, another highly ranked opponent. All three games will count toward the first ACHA DI ranking, to be released late in the fall semester.

Liberty will then play 20 of its 23 regular-season games in the spring, with all but four (at Ohio on Feb. 2-3 and at home against the Bobcats on Feb. 26-27) versus ESCHL opponents.

"I really like our schedule," Handy said. "We have eight new guys and this will be a great way to get them acclimated to play in the fall. We'd like to play more, but playing N.C. State at home and Adrian and Indiana Tech, two of the top teams in the ACHA, will give us a really good gauge of where we are and an opportunity to come back in the spring ready to go."

The Flames will open their 2021 schedule with back-to-back home series against Delaware (Jan. 15-16) and New York University (Jan. 22-23) and conclude it with home-and-away series against Stony Brook (March 5-6 and March 13-14, respectively) and home dates with ESCHL newcomer Drexel (March 19-20).

Liberty will vie for its fourth ESCHL Tournament title in five seasons in the league March 26-28 in West Chester, Pa., a final tune-up before the April 12-15 ACHA National Championships in Boston.

There is still a possibility the Flames will add a spring semester showdown with Long Island (N.Y.), which is making its debut as a program at the NCAA Division I level. Originally, Liberty was set to open its spring semester at LIU before playing two games at ESCHL rival Stony Brook, also located on Long Island. The Flames shut out the Seawolves 4-0 on March 8 to capture their third ESCHL Tournament title in four seasons.

If the Flames do face the Sharks, who are still finalizing their inaugural season schedule, it would mark the third time in 10 years they would challenge an NCAA Division I program after playing Penn State in its transitional year from the ACHA DI ranks in 2011-12 and Arizona State in its first year at the NCAA Division I level in 2015-16.

After a delayed start to practices, the Flames still have a month to prepare for their season opener.

"We're super excited," Handy said. "It has been kind of been tough, but we've got pretty much everyone back now and we are looking forward to more consistency of practice and schedule."

He said Club Sports Coordinator of Strength & Conditioning Chris Kerr and Graduate Assistant Dallas Johnson have done a fantastic job in getting the team physically prepared for the upcoming season. 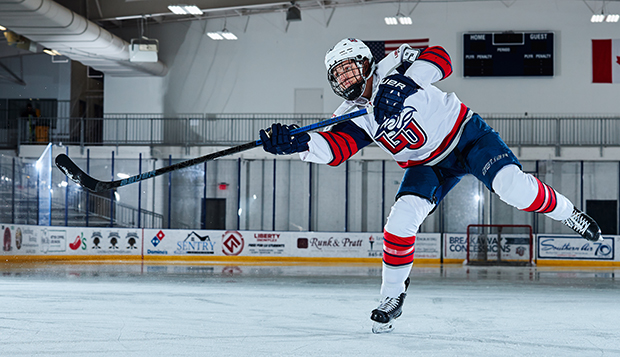 Cole Gammer is one of several returning forwards who will add fire to the Flames' potent attack.