Coach gets Flames' fifth-year cycling team in gear for spring 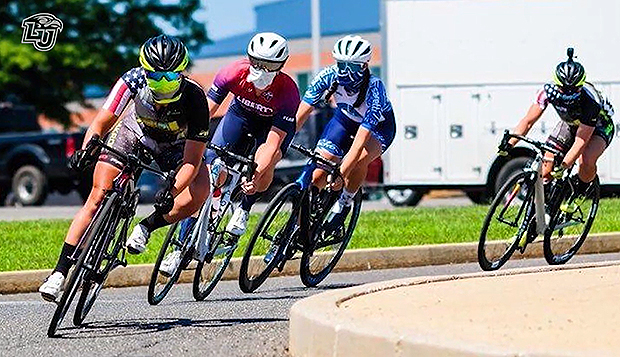 Bethany Matsick (center) continued her training through the summer by traveling to open races in the Mid-Atlantic.

Upon arriving in 2018 as a physics professor in Liberty University's College of Arts & Sciences and School of Engineering, Timo Budarz signed on to share his passion for cycling as Head Coach of the men's and women's Club Sports teams. Born in Chicago, he grew up cycling in Germany before returning to America, where he competed for Purdue University and nearly qualified for the U.S. National Team as a track cyclist.

At Liberty, Budarz inherited a roster, recruited by former cycling, men's swimming, and triathlon Head Coach Parker Spencer, made up predominantly of triathletes seeking to improve their conditioning on the bike.

"At the end of that year, it was clear we needed to not have dual-sport athletes (but) a pure cycling team," said Budarz, who was left with a two-man roster. "My primary means of recruiting was prayer."

God answered those prayers, gradually building up the Flames' and Lady Flames' rosters as he started receiving emails and phone calls. There were clear signs of divine intervention, such as an in-person inquiry from Bethany Matsick, who joined the team after hearing Budarz give an end-of-the-year address to the mathematics department. Matsick, who won the first two races of her collegiate career this past spring, graduated with a mathematics degree in May and is now pursuing her PhD in engineering.

COVID-19 may have shortened the spring race schedule, but it didn't dampen the spirits of the Flames' and Lady Flames' cyclists, who were in second place out of 23 teams in the Atlantic Collegiate Cycling Conference (ACCC) when the season was suspended.

"I look forward to this coming spring season," Budarz said. "We train all fall, all winter, the coldest part of spring and then are just shaking, ready to race in the spring. It was a bright future. Everybody was excited about racing and then they shut it down.

"We were carrying a bunch of momentum into spring (so) it didn't take anything from me to motivate them to continue training (over the summer)," he added.

USA Cycling has a category system that spans collegiate (A, B, and C) to open (Category I-V) levels of competition, so riders looked for ways to achieve the upgrade that they likely would have earned through collegiate cycling in the spring.

"It was hard to find open races, but my athletes traveled down to Georgia, Tennessee, up to New York, Pennsylvania to find them," Budarz said. "They're excited about the fitness that they've added this last year in training and they're also excited to switch back to polishing and furthering their preparations this fall in hopes of competing in the spring."