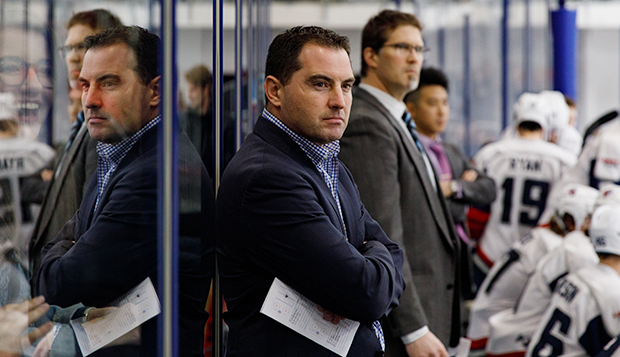 Coming off arguably the most successful season in program history, culminating in its third ESCHL regular-season and tournament championships in four years and a program-best No. 2 national ranking, Liberty University's ACHA Division I men's hockey team is poised to pick up right where it left off in 2020-21.

After sweeping top-ranked and previously undefeated Adrian College in a Feb. 21-22 series at the LaHaye Ice Center, the Flames were favored to contend for their first-ever national title before COVID-19 canceled the March 19-24 ACHA National Championships tournament in Texas.

"It was a fantastic year," said Liberty Head Coach Kirk Handy, who enters his 20th season at the helm. "We had a great blend of older guys and younger guys … who competed every day in practice and really grew very well as a team. They put themselves in a great position at the end of the year to win the conference title and be ranked No. 2 heading into the national tournament."

Handy noted that the team flourished academically and spiritually as well as athletically on the ice, with players maintaining a record-high 3.5 cumulative GPA in the classroom last fall and expanding their horizons by participating in the program's fifth cultural exchange trip to Finland from Jan. 2-10.

"It was great to see the growth in our student-athletes," he said. "We are still trying to get better every day and pushing our guys to grow in their faith, grow and succeed academically, to grow socially, and to succeed on the ice. Those are big, big things for us and are really pillars of our program."

Handy and his coaching staff kept those factors in mind as they finalized the incoming 2020 recruiting class, one of the deepest and most talented in team history.

"We spend a lot of time trying to make sure that we're bringing in the right guys, guys who fit with the mission of Liberty University and who fit with the mission of our hockey program, and all of these guys really fit what we're looking for in student-athletes," Handy said. "We're bringing in eight guys with a lot of speed, some great guys on the back end, and some guys up front who we really like."

Confidence in the returning players and the systems the Flames run will play a large role in continuing the on-ice success they experienced last season.

"We're going to build off the belief that we had last year," Handy said. "We did lose some integral parts of our team who graduated and have gone on, but we were able to bring back some returning players for a fifth year. We were also able to bring back a lot of experience through the (sophomore), junior, and senior classes, guys that gained great experience last year. They were part of that special group that we had and that is going to be key for us as we move forward."

Tryouts for the Flames' DI, II, and III men's hockey teams are set for the week of Sept. 7-11, after international student-athletes complete their mandatory 14-day quarantines. The Flames' season-opening series is now set for Oct. 9-10 against ESCHL rival Syracuse at the LaHaye Ice Center.