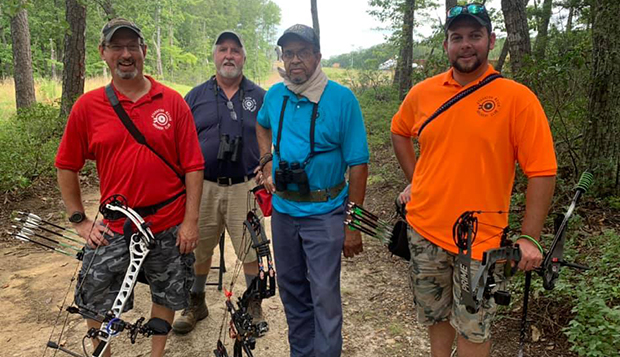 "He was far and away the best shooter there," Flames Head Coach and Commonwealth Games 3D Archery Tournament Director Ben Summers said.

Using his compound bow, Pickenpaugh — who chose Liberty over JMU, which also has a nationally ranked program — shot a total of 336. That score topped silver medalist Tray Markham, the area favorite, and bronze medalist Christopher Orr, who both fired rounds of 332.

"That was a pretty good margin, especially at that high of a score," Summers said. "Everybody thought Tray was unbeatable."

Former Flames Head Coach Ian Rigney, a 10-time individual and team champion as a competitor at Liberty, finished sixth with a round of 316.

A total of 45 archers competed in various categories at the event, one more than last summer when Liberty hosted the combined Commonwealth Games and State Games of America for the first time.

"A lot of the kids were really happy to have something to be able be there and to shoot because they have had a lot of tournaments canceled," Summers said.

Archers lined up at stations 30-40 yards away from 15 life-sized 3D target animals that ranged from a black buck antelope and impala to turkeys and bear along the wooded course, completing one round on Friday and one on Saturday. Competitors were awarded 12 points for "bullseyes," arrows to the heart area and between 8-10 points for shots to vital areas that included the lungs.

In the Women's Open division, Gracelyn Chambers, from the Outer Banks of North Carolina, won the gold medal with a round of 314, followed by Jadalynn Cooke (silver, 310), Shanna Orr (bronze, 296), and Tarren Thornton (285). Cortney Cooper, a 2018 graduate and former women's archery and disc golf team member, placed fifth with a round of 279.

All four of Summers' children, current and former members of Liberty Christian Academy's archery team that he coached for three seasons, competed in the event.

Lindsay Summers, a Liberty sophomore enrolled in the Air Force ROTC program who was selected as the Cadet Representative of the Year, earned a silver medal in the Women's Bowhunter division.

"Archery's been a part of their lives since they were little kids and they've all been shooting since they were 4 or 5," Ben Summers said, noting that he doesn't expect them to shoot for the Flames or Lady Flames. "They are all very good shooters, but we want them to choose whatever they want in life."