Western riders modeled grace in the face of disappointment 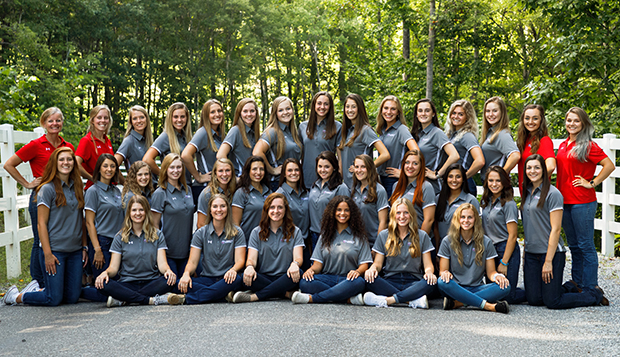 "There came the rollercoaster of emotions and confusion, and having the girls come in to practice and work hard right up to the point where things were canceled … that just was crazy, ( but) the girls were such good sports about it,"  Lady Flames Assistant Western Coach Madeline Shrode said. "They came in and they were diligent in what they were doing and they kind of had no issues. When you push so hard to ride so well and then you give everything that you have, knowing there is nothing else to give, it was really cool to see them be able to leave that in the arena and walk into this next season hopeful."

She said that showed the character development they have undergone since arriving at Liberty.

"That is something we like to focus on with the girls, training them not only to be good athletes, but to be well-rounded, Christ-representing people," Shrode said. "If this was their senior season, they were able to conclude that in a good way."

The Lady Flames experienced their share of highs and lows throughout a season that included a historic win at St. Andrews (N.C.), a perennial Region 4 power, and an opportunity to host their first Western show at the Liberty Equestrian Center.

"We had a great fall season and came in and had an even stronger spring season with the girls," Shrode said. "I would say the highlight of the season was being able to beat St. Andrew's at home and to also have them also celebrate with us. Then to be able to move on and beat North Carolina State and to push them out of that second-place position was really cool to see our girls' drive."

After closing in on a regular-season title, Liberty finished runner-up in a neck-and-neck Region 4 race.

"Big kudos to St. Andrew's and what they do over there; they do a great job," Shrode said. "The region that we are in is phenomenal. There are so many good coaches and so many good riders and we are really fortunate to be in it."

She said hosting the first Region 4 competition was an even greater milestone for the program, and she thanked Hunt Seat Head Coach Suzanne Flaig and Assistant Coach Kimberly Counts for showing her and her riders the ropes.

"We have hosted Hunt Seat shows before, and Suzanne and Kimi were so supportive and so wonderful," Shrode said. "We were able to pick at their wisdom and draw from that and to step into a great weekend for our program as a whole and make Liberty equestrian a more well-rounded program. That was really cool and very rewarding for our girls. Some of our seniors have never been able to host a home show for Western, so being able to give that to them and have it done well and for them to take pride in, ‘Hey, this is our home turf,' it was just a phenomenal experience for everybody."

She is confident in her team's ability to host future Western shows as the program continues to build on a solid foundation.

"Stepping forward, it means we are able to take on a little bit more, knowing that we did this," Shrode said. "First run, we got it done, so now that we have this under our belt, we can continuously take those strides forward."

Equestrian at Scrimmage vs St Andrews