Flames senior sees God's hand in bringing him to Liberty 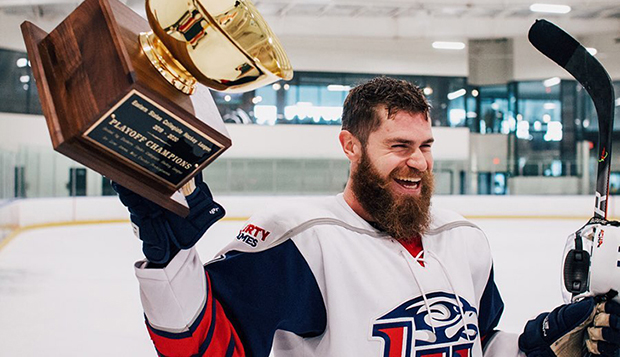 Liberty University's Division I hockey team has a small farmer show in southern Ontario, Canada, to thank for the talents of standout senior forward Andy Clarke, who was named the Flames' Most Improved Player for the 2019-20 season in their team awards announced this week.

While attending the show in the spring of 2016, Clarke's father had a conversation with a gentleman whose sons played hockey at Liberty. Clarke's father was informed that that very weekend, the university would be hosting its annual Flames Prospect Camp over the school's final College For A Weekend (CFAW) of the spring semester.

The next day, Clarke and his older brother, Cody, were on a plane to Lynchburg. It was a decision that would change his life for the better.

"God brought me on this crazy route of bringing me down to Liberty within a day to commit here so that I could get to where I needed to be with the Lord," Clarke said in March. "Right now, I have a closer relationship with Jesus than I've ever had before."

Clarke's journey to Liberty hockey began two decades ago in his backyard in Guelph, Ontario.

"I was 3 or 4 when I first started to skate," Clarke said. "We had a pool in our backyard that would freeze over every winter and my dad would get out there and wash it when it froze and would make sure that it was smooth and flat. He did that every year from the time that I was a little kid all the way until I moved away to play Junior Hockey."

Clarke's Junior Hockey career was different than that of many other elite hockey players. The physical forward, who was captain of his high school rugby team, is passionate about nature and wildlife. He opted to leave home at the age of 17 to pursue a university in Canada where he could play the sport he loves while studying science in preparation for a career after hockey in wildlife management.

"I didn't want to go somewhere where I lived. I wanted to put myself out there and live on my own and go to a new city," said Andy Clarke, who eventually followed Cody's footsteps to attend Carleton University in Ottawa while playing in a Junior Hockey League up there.

One of the teams that expressed interest in Clarke was the Ottawa Junior Canadians, the team that Cody was playing for at the time. After consulting with his older brother, Clarke decided to instead join the Winchester Hawks, a more talented team, for one year while enrolled at Carleton.

"When I went to Carleton and was playing Junior Hockey, that was when I went through a season of struggle," Andy Clarke said. "I definitely spent less time with the Lord and that was evident in my behavior."

It was right after his second semester that he and his brother both visited Liberty, where Andy Clarke is completing his B.S. degree in Environmental Biology and Cody Clarke his B.S. in Mechanical Engineering.

Since becoming a Flame, Clarke has gone through seasons of spiritual growth while also emerging as a scoring threat and locker room leader in the 2019-20 season.

This season, Clarke was a force for the Flames on the penalty kill, giving opponents a lot to handle with his 6-foot, 2-inch, 200-pound frame and punishing style of play, as well as his willingness to use his body to block perimeter shots. Offensively, he enjoyed a breakout year, scoring 12 goals and adding nine assists. His stellar season landed him on the ECSHL All-Defensive and All-Academic teams.

"Andy's a champion for Christ on and off the ice," Handy said. "He was a leader for us and the thing I really loved about him was that you knew what you were going to get every time he went out there."

"He was like a swiss army knife for us," he added. "You could put him anywhere and he would give his best. He was very strong on penalty kills but was overall consistent and selfless."

Clarke's senior season has been one that he will remember forever as the team achieved the highest national ranking in program history. The Flames also set a record for most wins (33) after sweeping top-ranked Adrian and No. 9 Ohio for the first time and winning their third ESCHL regular-season and tournament championships in four seasons.

Liberty was sitting at No. 2 in the country when the season came to a grinding halt due to COVID-19 health restrictions. The national tournament cancelation came the week before the Flames were set to fly to Frisco, Texas.

After completing his undergraduate studies in May, Clarke will move to Dallas to be closer to his family before eventually pursuing his graduate degree. 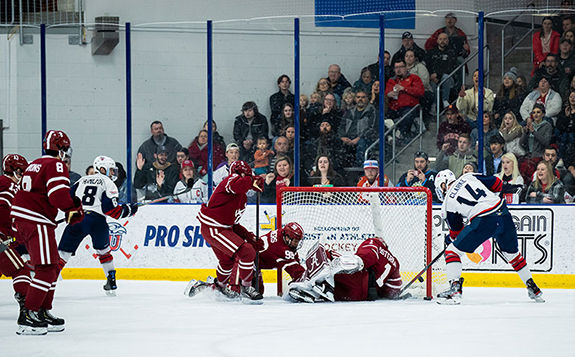 Clarke nets a goal behind Alabama's goal tender on Senior Night at the LaHaye Ice Center (Photo by Ellie Richardson).