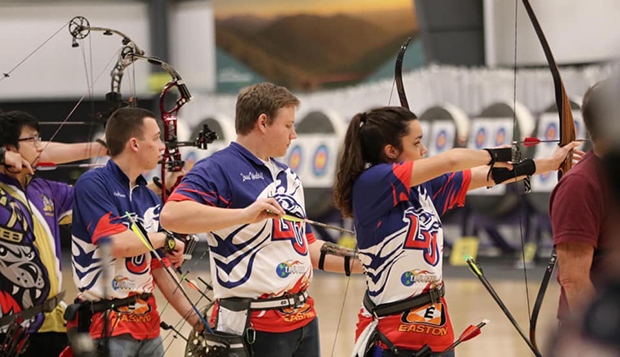 Rothermel was one of six team members (out of 12 who competed) to earn a top-three finish in their respective divisions. The event was nhosted by Horizon's Edge in Harrisonburg, Va., one of 12 regions nationally, which drew archers from Virginia, Pennsylvania, and North Carolina. Rothermel's finish earned him an invitation to this weekend's Olympic-style tournament held in conjunction with the NFAA Indoor Nationals tournament in Louisville, Ky.

"We had an amazing weekend," Flames first-year Head Coach Ben Summers said.  "Men's Olympic Recurve class is the most prestigious class in USA Archery. For Connor to earn this ranking, it's a big deal and an incredible opportunity. If he travels to Chula Vista (Calif.) in May and shoots well, he could be Liberty's first All-American archer."

Freshman Madison Gaines did not finish the competition after coming down with the flu after Saturday's first round.

Over the weekend of Feb. 7-9, Skelton finished third out of 21 archers in the women's collegiate compound division at The Vegas Shoot, the largest professional archery tournament in the world that attracted more than 4,000 competitors.

She scored a 593 out of a possible 600 in the collegiate portion of the two-day event, firing 30 arrows in both rounds.

She finished behind only Anna Scarbrough, from the University of Pikeville (Ky.), who won with a 597, and Alexis Ruiz, a Grand Canyon student ranked No. 1 in the world by World Archery, who fired a 596.