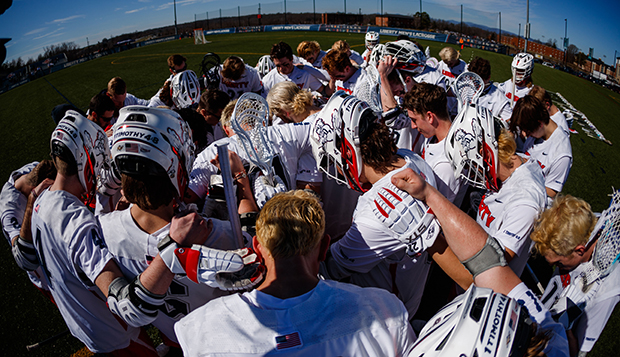 The Flames pray after Sunday's 16-14 win over Michigan State at the Liberty Lacrosse Fields. (Photos by K.J. Jugar)

In a battle between Liberty University's men's lacrosse team, ranked sixth in MCLA Division I, and 2018 National Champion Michigan State, ranked 12th, the Flames got six goals apiece from senior midfielders C.J. Nichols and Carter Elliott in a 16-14 triumph, Sunday afternoon at the Liberty Lacrosse Fields.

"We were talking about it as coaches what it would look like to get those two guys rolling in the same game, for the two of them to be firing on all cylinders," Liberty Head Coach Kyle McQuillan said.

"The main reason we won today was our middies were beating guys left and right," junior attack Jackson Miller added. "When you have C.J., Carter, Derrick (Esh), and Cam (Carter), they can all shoot on the run and hit corners after getting past their (defenders) with dodges."

Sophomore faceoff specialist Cole Jankowsky won the opening faceoff and the Flames jumped out to a 4-0 lead by scoring on their first four shots — two by senior attack Caleb Britton off assists from Esh and Miller, respectively, and two by Nichols, the last after senior defender Reagan Pritchett forced a steal.

"That was the best start to a lacrosse game I've ever been able to coach, in terms of both the offensive and defensive execution," McQuillan said. "To get out to that start was what allowed us to come away with the win today."

Two days after outscoring East Carolina by a 6-1 margin in the fourth quarter of an 18-7 triumph, the Flames (3-0) allowed Michigan State (1-1) to do the same thing to them, nearly erasing Liberty's 15-8 lead after three quarters.

"In the back of our mind, we knew that they were capable of coming back, and they showed that they were dangerous there in the fourth quarter," McQuillan said. "We were able to slow the game down, and we still won the possession game in the fourth quarter. We need to do a better job of not only using clock but capitalizing and finishing some of those offensive sets."

Liberty outshot the Spartans, 47-43, and held a 37-20 advantage in ground-ball pickups while Jankowsky won the faceoff battle, 21-13, to help the Flames maintain an edge in time of possession.

In the first quarter, Elliott stretched Liberty's lead to 5-1 with a running shot from the left side of the box before Nichols padded it to 6-1 at the 4:01 mark. MSU junior faceoff specialist Cory Jaeger answered with a fast break goal off of the ensuing faceoff before Elliott scored on a restart with 43 seconds to go, sprinting from behind the endline and wrapping a shot inside the right post.

Michigan State middie Matt Rice capped the first-quarter scoring by beating Flames senior goalie Ryan Reynolds with a bounce shot from the top of the box, trimming Liberty's advantage to 7-3.

Just 31 seconds into the second quarter, Elliott deked around a Spartans defender before rifling a shot into the left side netting to extend the Flames' lead to 8-3. But Michigan State capitalized on a man-up situation when senior attack Nick Bowman — who scored six goals to spark the Spartans — finished Jake Desrosiers' feed from point-blank range near the left post. Bowman then cut the deficit to 8-5 by rocketing a shot from the top left side of the box.

Nichols capped a long possession by the Flames by making a beautiful spin move and bounce shot finish in the left crease, increasing Liberty's lead to 9-5, before Bowman struck again after dashing out from behind the left endline. At the 1:28 mark, Nichols received a pass from Esh and unleashed a howitzer of a shot from the top of the right side of the box, pushing the Flames' lead to 10-6 before halftime.

Elliott started the second-half scoring with 13:37 left in the third quarter before MSU senior attack Bennett Osterink caught Reynolds off guard after a quick restart to cut the gap to 11-7. Nichols answered unassisted moments later, restoring the Flames' five-goal cushion, and back-to-back goals by Elliott and Carter gave Liberty what appeared to be a commanding 14-7 edge with a top-shelf finish at the 6:15 mark.

However, Michigan State netted the first four goals of the fourth quarter to slice Liberty's lead to 15-12 before Miller came out from behind the right end line and helped secure the victory with a short-ranged, sharp-angled shot.

"That was big," Miller said of his goal. "I saw there were like 15 seconds left on the shot clock and (MSU's defender) was playing my right side, so I went to the left, and it was open, and I just buried it."

Carter was able to run out the final 32 seconds to help the Flames preserve their two-goal lead.

"Michigan State was a really good team," Miller said. "They were a lot to handle. They pressed out a lot, so we had to keep moving."

Liberty, which opened its season with an 18-6 victory at Tennessee on Feb. 8, continues its five-game home stand with two more SELC Northwest Region contests next Friday at 9 p.m. against George Washington and Sunday at 2 p.m. against West Virginia. 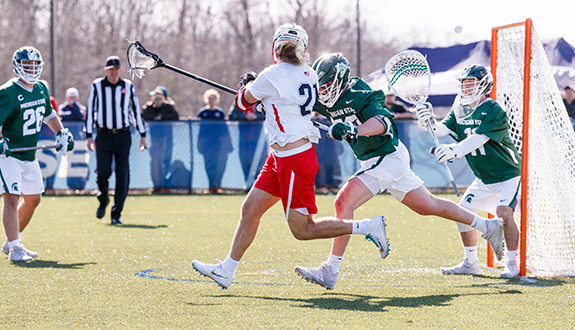