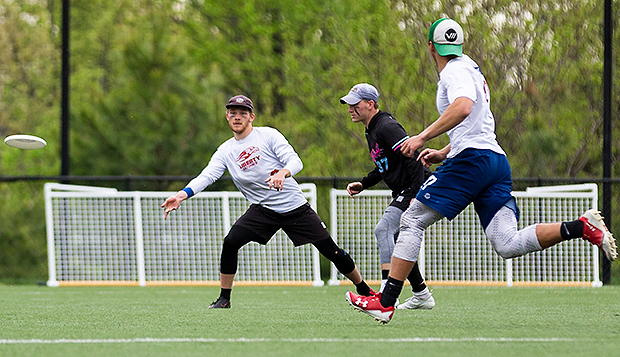 Liberty University's men's Ultimate team placed fourth out of 17 teams in this past weekend's Mid-Atlantic Warmup hosted by William & Mary at Glover Park in Glen Allen, Va., near Richmond.

"It was a good warm-up tournament against some solid competition, including a few who are ranked in the top 50 (by USA Ultimate)," Flames Head Coach Kevin Habermas said of Boston, James Madison, and Vermont, which edged JMU, 15-13, in the championship final.

Seeded third, the Flames finished second in their pool on Saturday, sandwiching a 13-11 win over SUNY-Binghamton and 13-7 victory over Williams around a 12-10 loss to VCU, which won the pool despite being seeded 14th in the tournament.

In Saturday's crossover bracket, Liberty defeated North Carolina's B team, 13-10. That set up Sunday's playoffs, where the Flames dominated Villanova, 13-7, in the quarterfinal round before falling to top-seeded eventual champion Vermont, 15-6, in the semifinals. That sent them to the third-place final against Boston University, which won, 10-9, on a universal point.

"It was a team effort. Everybody played and we had a lot of big contributors," Habermas said, including sophomores John Simmons and Jake Norman, junior Daniel Mills, and graduate Austin Heston. "We had a lot of role players come up big, too, and some big defensive plays by (juniors) Caleb Weldy and Noah Willson."

The Flames will next travel to Virginia Beach on Feb. 22-23 for a tournament that will feature several teams from the Northeast, including Delaware, Drexel, George Mason, Georgetown, George Washington Lehigh, Princeton, RIT, Rochester, Rowan, Slippery Rock, and Towson.

Liberty will then travel to Axton, Va., for a tournament on March 14-15 before concluding regular-season competition March 28-29 in Fredericksburg, Va., and hosting the Virginia Conference Championships, April 18-19 at the Liberty Mountain Intramural Complex.